Well, this is what we’ve been waiting to see. A SolidWorks iPad app? Puh-leeease… no longer needed. This is the full version of SolidWorks 2013 on a Fujitsu tablet sporting an AMD Z-60 APU Processor (with Radeon HD Graphics @1.00Ghz) running Windows 8 Pro. We knew we would start seeing this when chip makers started talking about their tablet processors and Microsoft released the Surface Pro. As demonstrated by AMD’s Workstation ISV Engineer, Olivier Zegdoun, you get all the pinching and panning your fingers can muster.

SolidWorks on a tablet

SolidWorks is certainly able to run on tablet-like devices and smaller laptops, but this is the first we’ve seen it on a touchscreen tablet that has been dedicated to running Android. This tablet is a Fujitsu STYLISTIC® Q572 Tablet PC that comes with 4GB of RAM, a 64 GB Hard drive, front and back cameras, one HDMI port, two USB 2.0 ports and Wi-Fi (of course) with up to 5 hours battery life. It starts at US $879.00.

Shopping around for a tablet to run SolidWorks? What have you found? 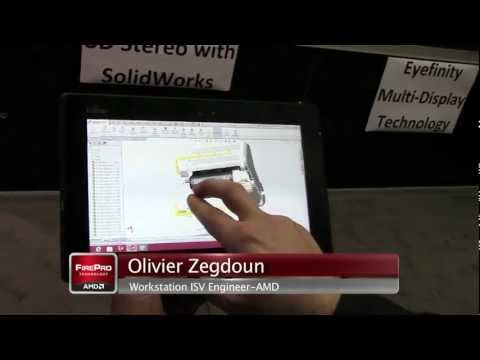 The 123D Creature from the Autodesk App Lagoon