Though they may be inedible, I think we can all agree that LEGO food is still pretty cool, especially if captured in stop motion. 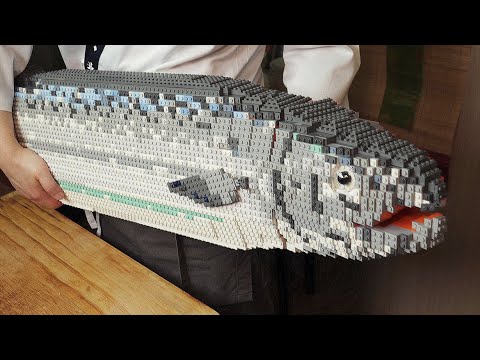 Earlier this month, YouTuber I Like Home created a LEGO donburi sashimi bowl. While the actual dish is relatively easy to make, his LEGO version took over a month to produce. More than 10,000 still shots are in this 3-minute animated short, but he was wise to keep mum on the amount of LEGO pieces he used to make the ingredients.

The king salmon alone looks like it’s comprised of tens of thousands of LEGO pieces. I Like Home painstakingly placed each piece not just to achieve the realistic appearance of the fish but to allow it to move just like the real one. From the flailing of the salmon to the moment he sticks a knife through it (*sniff*), you can see just how much attention to detail he put into the short animation.

Even in death, the salmon looks real. How he scales and debones the LEGO model in the video seems vivid. I Like Home achieved this fluid movement by using LEGO hinge pieces between the bones and joints of the salmon.

After “cutting” a few slices of salmon, I Like Home completed his dish by adding some LEGO onions, wasabi, and some scooped up roe from the salmon’s belly. Add these on top of a LEGO rice bowl, and you have yourself a dish that looks good enough to eat. Of course, you can’t eat this particular sashimi bowl, but it looks so good that you would want to go out and order an actual one for yourself. I Like Home has more LEGO delicacies on his YouTube channel, each of which looks better than the last.