While LEGO Technic sets are not supposed to be dangerous, that does not mean people will not try to make them so.

In the case of YouTube channel GazR’s Extreme Brick Machines, he found the best way to make a LEGO Technic saw as practical as its real-life counterpart: by attaching 14 LEGO motors to it. With six smart hubs and a 1:9 gear ratio, his first saw spun at a rate of 1,940 rpm. 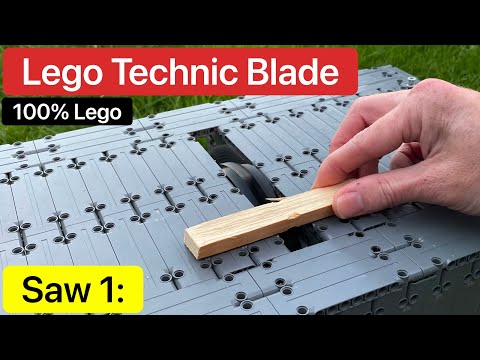 The chunky saw blade could easily cut through paper and cardboard, but it already had difficulty cutting through more rigid objects. Slicing through an apple took multiple passes, and you could see the motors starting to groan. Cutting a much tougher pencil was just impossible for it, as well as a thin piece of nylon. During these tests, you can even see the saw’s teeth start to dull and wear down.

The most exciting experiment with the first saw was when it was pit against a piece of wood. There was no way the 14-gear saw could cut through such a rigid material, so he added extra six motors. Yet despite the extra torque, the LEGO plastic saw was no match for the compact wood. 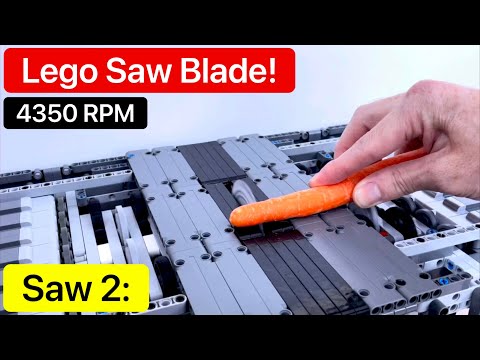 He fitted the next saw with a 9×9 LEGO saw blade and a gear ratio of 1:15. With the added power and thinner blade, this second saw had an output of 4,350 rpm. So did any of this make it a better saw? Well, yes, but not by much.

It could still cut things like paper and cardboard with no problem and could now cut through foods like carrots and cucumbers. Yet, thicker materials such as carpet were no match for this much faster blade!

Sadly, the worth of a saw is measured by how well it can cut wood, and this one could not do it. The piece of wood was roughly the same as the one used on the first saw, and that was not even thick either. So while the LEGO saw suffices as a food and paper cutter, it just does not make the cut as an actual saw.

GazR’s Extreme Brick Machines YouTube channel usually sees him making all sorts of LEGO vehicles, but these saw machines were a nice break from the monotony. You should check it out if you’re into the more mechanical side of LEGO building!