Most of us look inside a trash bin and find a pile of hot garbage, but not Studson from Studson Studio. He finds creativity in the strangest of places, and that includes his own waste (you know what I mean).

Last Christmas, inspiration instructed him to create a horror of a present: a remote-controlled train engine with the visage of DreamWorks’ Shrek on the front. Think Thomas The Tank Engine; only this one is fueled by nightmares instead of coal. 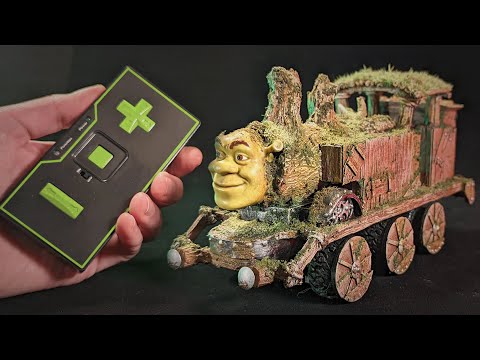 Rather than taking the easy route by using a toy train engine, Studson made his train base using an old RC car. He chopped a pair of wheels off an old toy ATV, added some broth caps to make them bigger, and glued them on to complete the moving portion of his train.

The base on top of the wheels is made out of foam that was painted black. Add in an old toy car seat for the front bumper, a toy robot foot for the back bumper, and some sticks to widen the base, and Studson’s ogre engine was coming along just fine.

Studson whittled down the sticks on the side and added a few seams wrapped in twine at the front. The most significant addition, however, is the toilet cardboard roll engine. Covering the sides of the machine are foam and wooden stirring sticks haphazardly stuck together to give them that swamp feeling ogres love so much.

But to give the toy a natural essence, Studson took some old, chopped-up sticks and placed them on top of the engine. He sculpted some air-dried clay to fill in the gaps between the wood and make the engine look like a single, cohesive log. The back of the engine was made in a similar fashion using foam and sticks.

Studson replaced the tiny wheels of the toy car with monster truck wheels befitting his monstrosity. He popped on some cardboard milk caps (known as “pogs” to 90s kids), a few bedazzled gems, four bumpers made from thumb tacks and small twigs, and of course, Shrek’s iconic head, made possible via an old Pez dispenser.

After painting the train using a mix of greens, oranges, and browns (as well as adding an ominous warning at the back), it was time to add in the moss. This particular brand of synthetic overgrowth was made using white glue and fine green flocking. It doesn’t matter that Studson didn’t paint the engine so well; the moss could cover most of the toy anyway.

Once dry, this train engine was fit enough to rescue a princess and ward off any fairy tale squatters on your property. If the scary Shrek face doesn’t get the job done, the engine’s mossy appearance certainly will!