Unlike the expensive 3D printers, a 3D pen isn’t the most precise instrument for making printed models. That’s not entirely the pen’s fault, however.

By adding in a human element, you’re effectively reducing the speed and accuracy for a more personalized 3D print. Still, some people like that human touch – even if it doesn’t necessarily look as good as the things printed out of a 3D printer.

Over the course of 51 hours, the creator of the Build-a-Skill YouTube channel documented his journey from 3D pen printing novice to… a somewhat adept 3D pen printing artist: 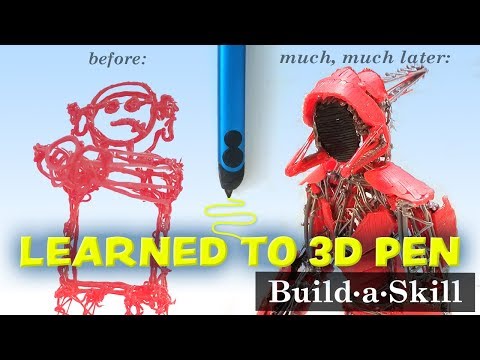 From drawing spindly 2D lines on paper to making a fully-formed robot, it’s interesting to see how far dedication can bring you in such a short time.

Testing Out the Medium

The first models are robots that started on a 2D plane. This is where novices feel out the basic dos and don’ts of 3D printing – like making sure all the parts are connected so they don’t get left behind!

After learning how to make a few basic shapes, the creator wanted to see if he could make a car. He made the sides of the car in 2D before connecting them together to make a 3D frame. Once the frame was connected, it was simply a matter of filling in the empty space with filament.

This is where he made one very important discovery about 3D pens. While they can be great at making lines and frames, they aren’t as great at filling out solid objects. What this means is that 3D pens are really good ideation tools for making wireframe models; not finished products.

With this in mind, the creator made a couple of models which play to the 3D pen’s strengths. He made a few wireframe vases (none of which made him particularly proud), a t-rex, and a very intricate unicorn.

The unicorn deserves special mention because it incorporates a wireframe along with wrapped filament to give the model its shape. It doesn’t fill every single crevice, but this spider web technique does the job of projecting the model without wasting too much filament. Add that to the unicorn’s hair, which uses different layers of filament, and you start to see more depth and texture in the model.

After making models of a robot and a very cool Day of The Dead mask, his final 3D model harkened back to his first one: which is to say, another robot.

Using everything he learned, he made a red wireframe skeleton for the robot before adding in a ton of elements to give it depth and texture. Hydraulics, wiring, a sword – the amount of detail on this robot is insane. It may have taken 15 hours to build, but the payoff is definitely worth it.

The video makes it look easy to learn how to use a 3D pen, but we’re sure it is still challenging. Even with years of 2D drawing experience, the creator mentioned it took him a long time to get anywhere close to making something worthwhile. If you want to try your hand at it, be sure to bring a lot of filament and even more patience.