Near the shores of Los Angeles stands the Ivanhoe reservoir. And covering the entire surface of this 39-hectare (96-acre) wide reservoir are over 96 million shade balls.

You must probably be betting that this is the world’s biggest ball pit and you might be right! But those balls serve a greater purpose than providing the local population a place to host kids’ parties. 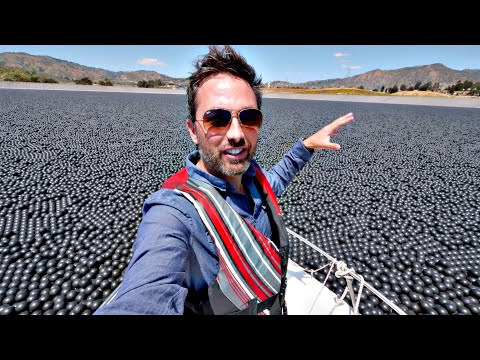 A few years ago, Derek Muller of Veritasium took a boat trip to the middle of the Ivanhoe reservoir. Here, he picked the brains of its custodians and found out just why this reservoir which provides so many people with clean drinking water has so many black balls floating on top of it.

First things first: shade balls AREN’T made out of toxic plastic. They measure 10 cm in diameter and made from a non-toxic, high-density polyethylene (HDPE) which is totally safe to ingest. The balls are partially filled with water (210 ml to be exact) to weigh them down and prevent them from flying out of the reservoir.

But their most distinguishable feature is that they are black – unlike the colorful plastic balls you normally find in ball pits. This black color is made possible via a material called “carbon black,” which blocks out sunlight and prevents the water in the reservoir from excessively heating up.

So why go through such lengths to cover the reservoir with shade balls?

As it turns out, it’s to prevent the formation of carcinogenic bromate in the water. Bromide, on its own, is a harmless compound which naturally finds itself in all bodies of water. But when that water is mixed with chlorine in sunlight, it produces toxic, carcinogenic bromate. Since chlorine is needed to keep the water disinfected, the only way to keep the reservoir pure is to handle the sunlight problem.

Prior to this, the folks living near the reservoir tried to look for a couple of different solutions. One idea was to cover the reservoir with a wide tarp or trampoline. They also thought of covering the reservoir with long HDPE pipes. However, the latter idea could be too costly due to the amount of material, not to mention the possibility of the pipes being easily displaced.

Eventually, Dr. Brian White found out about bird balls – these non-toxic, HDPE balls which can be used to deter birds from settling on bodies of water. After testing them against the other proposed solutions, the bird balls won by a landslide and were repurposed into shade balls.

While the shade balls definitely do their job of keeping sunlight away from the water in the reservoir, they have a couple of other handy uses as well.

Just like the bird balls which came before it, the shade balls excel at keeping flying wildlife at bay. This prevents other toxic elements besides bromate from developing in the water. The shade balls also prevent algae from forming, resulting in the use of less chlorine to disinfect the reservoir.

And just before you go thinking that the black balls increase the evaporation rate in the reservoir, Derek Muller made sure to clarify and explain this particular issue to the staff at the L.A. reservoir.

Apparently, having the balls be half-filled with air actually decreases evaporation. While the top of the balls does get hotter, the area below them remains cool. Since air is a good thermal insulator, the heat on top doesn’t reach the water below. This reduces the evaporation rate of the reservoir by 80-90%.

Considering they spent 33 cents per shade ball, that’s a total of $31,680,000 used to cover the entire L.A. reservoir with black balls. But according to Chief Operating Officer Marty Adams, this cost serves as offset given the amount they save on water maintenance.

So there you have it – what looks like the world’s biggest ball pit is actually home to one of the cleanest sources of water out there. So if you happen to come across the L.A. reservoir and have an inkling to jump in, please don’t. Not only will you be contaminating millions of gallons of water, but you’ll also be escorted out by security!