If you break it down to the basics, 3D printing simply involves heating filament and using a bunch of preprogrammed electronics to place it where you want. So, in theory, you can cut out all the complexities by heating the filament and manually spreading it yourself… right? 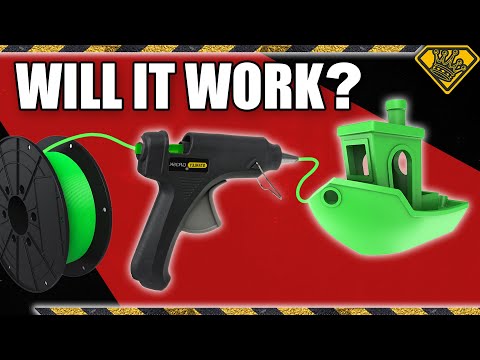 While 3D printing pens definitely exist, the guys and girls at The King of Random wanted to see if you could repurpose a glue gun to heat up some PLA+ filament and 3D print with it.

Right off the bat, you can see the biggest problem of printing with a glue gun: the filament is way too small in diameter to be pushed by the gun’s mechanism. Normally, you would use special glue sticks which are made to fit inside the chamber of the glue gun, allowing the walls to press the glue through the heater and out the nozzle.

So how do you turn the PLA+ filament into a glue stick?

With the help of a real 3D printer, the guys were able to create a bunch of PLA+ sticks which would feed perfectly inside the glue gun chamber. Considering PLA+ melts at around 130-160°C (266-356°F), your average glue gun will be able to easily melt the filament and use it for non-glue-related purposes.

After printing the PLA+ glue sticks, they decided to test them. It took some time for the glue gun to heat up but after a while, the PLA+ filament really did go through the nozzle; all heated up and ready to go!

Now comes the hard part: actually making something with the glue gun. Since the human hand is nowhere near as accurate as the technology of a 3D printer, drawing with a gun will take some getting used to.

The good thing about the PLA+ filament is that it cools pretty fast. This allows you to add more on top of your existing creation much faster and it doesn’t disturb your creative flow. I can see dedicated artists mastering this technique, provided they spend enough time with this 3D printing glue gun.

Suffice to say, the guys and girls at The King of Random didn’t have as much time with their repurposed glue guns as they would have liked. They were able to make a couple of 3D-printed roses, neither of which looked like something you would want to buy on Etsy.

Still, the concept was a success! If you don’t have a 3D printer of your own or don’t have the money to buy one, you could, in theory, just buy a glue gun and ask a friend to print you some filament sticks. You can repay them later by making them something with your 3D printing glue gun!