We’ve all been told never to consume soda and Mentos at the same time. It is pretty obvious why: you don’t want to see yourself vomiting some foam. How would that happen? Well, it’s pretty simple. This scotch mint can nucleate the carbon dioxide in the soda, resulting in a rapid increase in the latter’s precipitation rate.

If you want to know what that looks like without subjecting yourself to a really bad stomach ache, look no further: 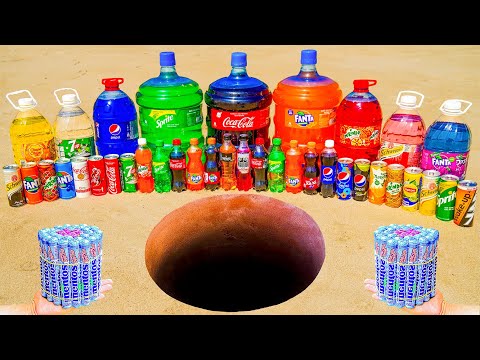 YouTube channel Toys King took a ton of carbonated drinks and poured them all into a water drum. Then, armed with some Mentos and baking soda, they shot the contents sky high.

In order to get the best possible angle of the eruption, the team dug a hole in the sand and placed the drum within. Since the distracting blue figure of the drum was already concealed, witnessing the outcome of the awesome experiment would be more amusing. Moreover, it made the pouring of the carbonated drinks easier for the team.

Dumping gallons of sodas needs no explanation since it was the amount needed to get the best result out of the experiment. To make things more interesting, let’s try estimating how much soda was poured into the drum. Let’s say the first 3 containers had 5 gallons of soda, 2  jugs had 2 gallons, and the 4 had 7 liters (1.85 gallons). Add that to the 16 .355 L soda cans and the 12 .5 L soda bottles. All in all, these folks poured roughly 27.65 gallons (104.67 liters) of soda in a single water drum!

As amazing as that sounds, the combined slosh of sodas doesn’t look refreshing at all. The black liquid that slowly rose inside the drum look a little like Coca-Cola but imagining the mixture of flavors, the blend would probably taste like toilet cleaner.

To get the soda to explode, they prepared nine rolls of Mentos (around 126 Mentos discs) mixed with baking soda in a plastic cup. They also prepared a cup of green food coloring to make the eruption more visually appealing.

With all the pieces in place, the only thing to do now for the team was to mix them all together. They dumped the Mentos and food coloring inside the drum and…

BOOM! An eruption of green foam rocketed skyward from the water drum’s hole. Thanks to baking soda, the mixture of carbonated drinks turned to foam. From a distance, it was like a snake violently poking its head out before slowing down to a crawl.

See? This could happen inside your stomach if you tried ingesting soda and Mentos at the same time. So do yourself a favor: stick with water instead.

How to Create a COVID-19 Paper Mache Model