Last week Carbon and Adidas announced a deal to produce 3D printed midsoles. But how big is this deal, exactly?

It’s hard to gauge the magnitude of a business deal from popular reports, but I believe it can be estimated based on the statistics shown to the public.

Carbon has developed a custom resin specifically for this application, which will obviously require a flexible material that is resilient, able to withstand considerable forces as it is to be located on the business end of shoes, and must exist in harsh outdoor conditions for long periods of time. With this material, Carbon will produce production-ready midsoles for Adidas. 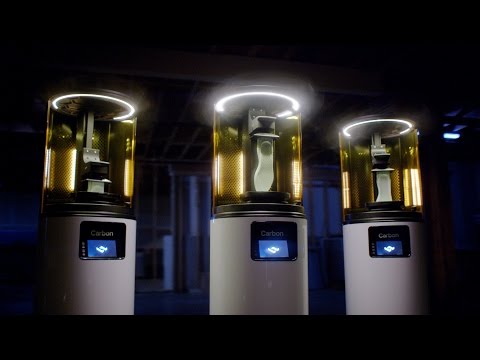 What do we know? Well, according to the Carbon press release and materials, they are to produce “more than 100,000 pairs by end of 2018”, and that:

Three hundred pairs of Futurecraft 4D will be released in April 2017 for friends and family, followed by more than 5000 pairs for retail in Fall/Winter 2017, and further scaling in the coming seasons.
So according to this, it appears they must produce something close to 95,000 pairs, or 180,000 prints, during 2018.

Let’s do some arithmetic to guess at how many Carbon M1’s this might correspond to.

I’m assuming a 12 hour print day because the machine will print these midsoles fairly quickly – it’s not like you can leave the machine overnight for a 29-hour print, these prints will be much shorter than that. So unless you have 24-hour staff supervising print activities, you probably will have a constrained production day.

How long might this part take to print on a Carbon M1? That’s hard to say, but we know from a number of videos that the Carbon M1 can print very quickly, especially on a sparse structure such as the design of the Adidas sole. Carbon’s most notable video has a ball-sized object being printed in about seven minutes, but this is a larger object so it will take longer. Let’s make a guess that each print takes about 20 minutes to complete. And if you can fit more than one midsole into a single print job, it will take about twice as long, so the math will work out either way.

For a 20 minute print, you can produce three midsoles per hour per machine, assuming operators can swap out the completed prints and fuel the machine at warp speed.

To produce 60 midsoles per hour in this configuration, you would need something around twenty Carbon M1’s operating simultaneously. If there are machines out of service from time to time, you’d need a few more to compensate.

Our previous analysis of Carbon’s total cost of ownership revealed that a single Carbon M1, operating at normal business velocity would cost around USD$290K for a fully-outfitted three year subscription.

We can then estimate that a single year of operation of a Carbon M1 might cost close to USD$100,000. And in the twenty machine Adidas scenario, that would be USD$2,000,000 (plus more for facilities, labor, other equipment and redundant equipment). But let’s say it’s USD$2M.

For the 180,000 pairs, this suggests that each might costs Adidas at least USD$11 or USD$22 per pair for the Carbon printing costs alone. That’s probably quite a bit higher than what they would pay for producing “normal” midsoles using mass manufacturing but probably is well within the cost envelope for sales of this premium shoe. It seems like a feasible project.

For Carbon, the may gain a few million in revenue from this deal, but that’s not the whole story.

What this project really means is that it proves that 3D printing can actually produce consumer-level products at moderate scale effectively, at least for premium-cost products.

And that proof could easily entice other manufacturers into exploring the same technology for their operations. That’s where the real benefit to Carbon – and indeed the rest of the 3D printing industry – will be seen in the future.