A startup company has launched a 3D printer specifically designed for clay 3D printing. ClayXYZ, found currently on Kickstarter, has developed a simple and low cost 3D printer that prints just clay. But it’s not any clay, it’s the commonly available “air hardening clay” that doesn’t require firing in a furnace as most clay does.

This obviously simplifies the process: 3D print the clay object and then wait for it to cure naturally, usually within 24 hours. This clay can be re-used easily by simply soaking it in water again to produce a slurry suitable for extrusion. Of course, this won’t work if you’ve glazed the object.

The 3D printed clay objects can be finished in traditional ways, such as sanding and glazing.

That’s important because the resolution of this clay printer is not particularly fine; you can clearly see layer lines on all of the print samples.

But I think that is acceptable for this type of print: the texture may actually be an artistic feature in some cases. If not, it is easily dealt with by sanding and/or glazing. 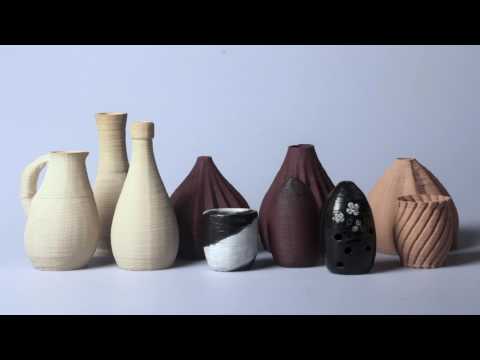 One very interesting capability of this device is that the prints could potentially be used in foodsafe environments, unlike virtually all of the plastic 3D prints you might find. With a glazed exterior surface, you could easily find yourself eating off a 3D printed clay plate.

The technology used here is based around an air compressor, which is used to “perfectly remove bubbles” from the wet clay. This obviously improves output quality. It also seems that their extrusion system could be mounted on other 3D printers.

However, their own device offers a reasonable print volume of 210 x 200 x 180mm, and a 0.6mm nozzle for clay extrusion. This coarse printing will also speed up print times considerably.

The input material cylinder can hold about 15cc’s of clay, providing an upper limit to what you can print. Some will be “lost” in the plumbing, and not make it to the nozzle, so capacity will be somewhat less. However, it is unclear whether they offer a “restart” capability to reload and resume printing on larger objects.

The price of the ClayXYZ device is USD$749, which seems to me to be sufficient to feasibly run a business of this type, lowering the possibility of company failure, which we’ve seen all too often recently.

The ClayXYZ 3D printer could be a nice addition to a workshop, as it could produce different types of objects.