A recent Kickstarter project from OPENCREATORS has shown a 3D printer with features we haven’t seen previously.

The cryptically-named BS210 is a desktop 3D printer using the standard filament extrusion process, and the machine is mostly typical among many in the market, with the exception of a couple of rather unusual features.

Certainly it appears to be a competent machine, including a 210 x 210 x 250mm build volume, robust metal frame to reduce vibrations and a heated build surface for print reliability.

The first one is an automated leveling system that OPENCREATORS says “industrial grade perfection and precise accuracy in measurements”. Curiously, they describe the problem being solved by this feature as something they’ve carefully researched and identified:

The main reason why an object fails to 3D print is because of the unstable settlement of the first layer. By implementing microscopic sensors to sense even the slightest curves, the module allows an even and consistent gap between the nozzle tip and the plate. Therefore, we were able to improve the unstable settlement of the first layer that was not resolved from general auto bed leveling.

I’ve never heard “Bed Adhesion” referred to as “Settlement”, but it is certainly a problem. But it’s well-known and sophisticated auto-leveling systems have been included in a great many desktop 3D printers recently.

But there are two other features that are truly unique.

One is the “Slide Parking Head”, which I’ve not seen on any other 3D printer.  The “SPH” is an unusual mechanical system that drives two separate extrusion heads. It’s quite different, yet offers some interesting advantages.

The SPH involves a single moving head, rather than adding the expense of two sets of mechanicals, there is only one. Yes, this has been done before, many times, by simply strapping two nozzles onto a single motion system.

But there is a huge disadvantage to that approach: the two nozzles must be precisely aligned in three dimensions, adding to maintenance and operating procedures. But even worse, two adjacent nozzles dramatically raise the possibility of one of the nozzles catching stray plastic and dislodging the print in progress.

It’s for this reason many current vendors are developing single nozzle solutions, where two filaments are led toward one nozzle. The nozzle output is controlled by feeding (or not) each filament. However, there are delays each time the nozzle’s material is switched for purging.

The BS210 avoids the risks of dual nozzles and the delays and control complexity of single nozzles by detaching the unused nozzle!

Essentially, the motion system moves across the X-axis and can attach either nozzle on its left or right side. This means there is only a single nozzle active, and no purging is required. A great idea! However, I am suspicious of the nozzle alignment in this system.

This dual nozzle approach would enable, among other things, the use of water-soluble support materials for printing highly complex shapes.

The other truly interesting feature is what OPENCREATORS calls “ABC”, or “Automated Build plate Changer”. (Maybe it should be called “ABPC”?)

The ABC is simply a conveyor system that presents a fresh borosilicate glass plate in the build volume. When a print completes, this plate is pushed out the front on rails and a new plate is introduced automatically for the next print to begin.

This is a very interesting automation solution that likely works well. I’ve had previous experience with MakerBot’s ill-fated automated build platform, and found that its plastic belt simply didn’t last more than a few prints. Here these glass plates will no doubt last a very long time.

As per this diagram, it appears that you load a large number of plates at the rear of the BS210, where they slide into the build chamber as required. Here it is in action: 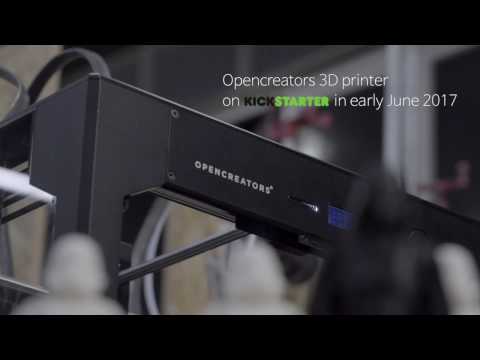 This may explain why the auto-leveling is an important feature: without it, you lose the build plate automation as you might have to intervene to ensure things are level before commencing the next print. On the other hand, glass plates are usually the flattest surfaces you can use, so the need for leveling should be minimal, unless the ABC system positions them with less accuracy.

While there seems to be a great deal of input plate capacity, it does not appear so on the output rails, which look like they can fit three or four plates only before they must be removed for processing. I don’t believe it allows you to do a  “limitless amount of printing” as they claim. You must unload the plates sooner or later.

Nevertheless, this is a great innovation and certainly rare in the desktop 3D print world. It seems that businesses printing large quantities of objects could benefit by reducing their labor costs through the use of this machine.

The machine is now available for order on Kickstarter, where you will pay USD$2,899 and up for various combinations of the  BS210.

As this is a crowdfunded machine, you must exercise caution as there have been countless project failures recently. However, OPENCREATORS has been in existence since 2012 and has previously delivered at least two different 3D printer designs, so your risk is likely lower than with a brand new startup.