Do you ever imagine a day where you won’t have a computer tower tucked up under your desk? Cords wadded in the corner next to a year-old corn chip/skittle/dust bunny mass that escaped the reach of the occasional vacuum cleaning. Granted, the box creates a cozy, warm home for your feet during a cold winter, but if all the workstation you needed was packed into a container the size of a 30″ screen atop your desk, would you be ok with that? The HP Z1 is such a machine, released a year ago this month by HP. We take a look at the footprint, the functionality and see if it packs the punch of a typical workstation tower setup.

It’s been a year since HP’s first all-in-one hit the market and while it’s HP’s first production all-in-one, other manufacturers have put out their own versions. Since lugging around a ‘lunchbox’ computer back in the early aughts, then with laptop and all-in-one workstations hitting the market, we’ve wanted to get our hands on one. So, this being the first all-in-one tested on SolidSmack, we’ll provide the disclaimer that there’s a bit of excitement that comes along with using it.

Being an all-in-one, you can imagine the weight is fairly hefty. The HP Z1 weight starts at 47 lb (21.32 kg), including the stand and goes up depending what all you have in it. That’s a heavy-ass machine and, admittedly, we were hesitant to sit it on a glass desktop. It’s fine so far (fingers-crossed), but people have been warned not to lean on the desk.

There’s a lot of excellent features for this workstation, the top of which are the crisp, bright screen, the quick access to internal components and the WiFi connectivity. Why typical workstation never had integrated WiFi is beyond me, as it’s a joy to boot-up and connect to the network without cords or connecting a WiFi adapter. The bright 27″ LED-backlit display makes a ZR2740w and ZR24w screens look grainy and drab, but you’ll be delighted to know it support one external display via a Display Port connection.

There are ample other connections on the (lower) back and (right) side with two USB 3.0 slots on the side (great if you want to expand storage to an external device) and four USB 2.0 slots on the rear. You have mic and headphone jacks with a card reader on the side as well. The back hides the RJ-45 connection, along with your Line In/Out ports, Display Port, SPDIF and yes, a subwoofer port. Those back ports are difficult to get to, but at least keep any wires you’re plugging in low against the desktop.

Two other qualities stand out about this computer–the heat around it and the fan sounds coming from it. There are neither. This machine is extremely quiet. With the amount of fans inside, you would think a constant buzzing sound would be the norm, but you’ll hear nothing. Amazing enough, these quiet fans keep the case cool to the touch. Quite the opposite of a standard workstation and monitor setup where the sound of fans and hard-drives spooling up accompany the heat radiating from the screens.

Why no touchscreen or Windows 8? The Z1 was first available for purchase in April 2012, quite a bit before the launch of Windows 8 for the general public later that year in October. All-in-one computers are starting to incorporate touchscreens, so I would expect the next version of the Z1 to have both Windows 8 and touchscreen options.

This video give you an overview of the idea behind the Z1 and how it came together. You’ll see how all of the components go in and how they keep it all cool.

What’s in the Box?

Roughly the size of a large monitor packaging, the box folds open making it much easier to extricate from the foamy confines and wrapping. If you have the lower back strength to lift 50 lbs, you can maneuver it easy enough to your desktop. Joy of joys, you have one power cord, as the mouse and keyboard are wirelessly integrated, and no messing about with (or purchasing) an HDMI cord is required, unless you’re adding an external monitor. Windows software is pre-installed of course. All of which makes for the fastest unboxing and set-up of any desktop workstation we’ve used.

Even if it’s the only time you do it, you can’t help but pop the top on this rig when you first set it atop your desk. Two latches on the bottom of the display pop the monitor portion up with a smooth, clean motion of hydraulic cylinder on the left side and closes with a shock absorber that slows the closing within the last couple inches. Each component can be easily attached and dettached by lifting levers or squeezing handles. Now, it’s important to note, these are all custom fit components, so there’s not switching out the GPU for the spare in that other workstation. It’s easy enough to swap them out, thy just need to be ordered from HP. The HP Z1 upgrades and replacement options along with guides can be found here. It’s all very easy to replace though. iFixit gives it a repairability score of 10 in their teardown of the Z1 and I wholeheartedly agree that it’s the most modular system with minimal effort to remove any screwed in components.

We use these benchmarks because they’re freely available, allowing you to download yourself and within 30 minutes evaluate your computer against what we’re reviewing and the results others have received.

SolidWorks Punch holder benchmark
Punch holder results: 52.98 seconds (Total rebuild time)
You can get this benchmark here. This score is the time it takes for the punch holder model to rebuild. The top 30 computers (including laptops) hit scores under 60 seconds, the fastest rebuilding at 40 seconds. The punch holder is a single part, but quite complex. Although we have used a desktop and laptop workstations with slightly better results, this is good rebuild time and it screams through other modeling task like working with large patterns, moving between parts in large top-down assemblies and making updates to drawing views.

Passmark Benchmark
Passmark rating: 2401
You can get this benchmark here. This score is determined relative to other computers running the same tests. If you don’t have a lot of computers, it’s a great resource. The higher the number the faster the computer. The top 20 computers (including laptops) hit scores over 5900. Comparing with similar workstations, like the HP Z600 and Elitbook 8560w and their entry-level HP Z220 reveals that the Z1 scores well with the 3.40 GHz Xeon processor and excellent for the 16GB of memeroy packed in with fair marks for the Hard driver performance and low marks for GPU performance. It’s important to note here that the 3D mark is based purely on the GPU though, so in terms of multi-core processing through the CPU, you’ll be doing just fine.

It’s a rough time for computer manufacturers. PC sales have tanked the first quarter of 2013 and there’s plenty of doom to read about in the press. HP still (just barely) leads the pack in market share for PC sales. While I’d prefer to be more mobile with an ‘all-in-one’ laptop, this desktop all-in-one packs a lot of punch. The beauty of this is not only the performance but the streamline design, quick set-up and easy access to internal components, be it to replace or simply admire from an engineering perspective. Even though it is somewhat large and heavy, you’ll find it easier to move (for those bi-yearly cleanings) than a typical desktop and the lack of excess cords clears both your desktop and under-desktop area making crowded work conditions much nicer to work in.

While this computer has a 500GB drive configuration, I would opt for the larger 1TB configuration (or an external drive if you don’t mind the additional cords and components on your desk.) The CPU options are great, but for all available, you are limited to only 4 cores. That will limit you on the CPU-based visualization, but as we’re hopeful the next generation of Z1’s will incorporate touchscreens, we’re also hopeful that more cores will become available. For most, the Quadro 1000M is suitable, but the higher-end 3000M is an option and will more than double the cores and bandwidth. The SSD option is also one option I’d opt in for along with any extra memory you can afford. With those extra options, that may push this capable all-in-one out of budget for you really quick, but if the standard features available on the HP site work for you’re product development workflow, you can easily enter into the age of all-in-one computing for under $3000.

One word rings true for the HP Z1 and that is elegance. HP has certainly set a high bar for all-in-one computer manufacturers. From the internal component layout and access and how that translates to the external design and experience is a beautiful thing. It shows the thought put into the design, not only with the form-factor and maintenance, but also with great regard to the working condition of the professional. This is one computer that will look great in the office and provides the performance most 3D professionals need, with a slightly higher price tag than the standard desktop. All features that make us anticipate the next generation of Z1 workstations and the part all-in-one computers will play in 3D software and product development of the future. 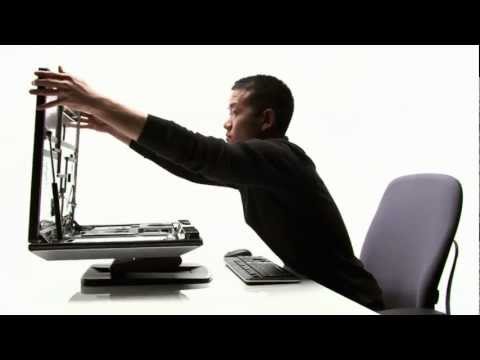