Ending the year with pure excitement can put a bit of pressure on content creators who are trying to please their followers. One of them is YouTuber Alex Apollonov of I Did A Thing. 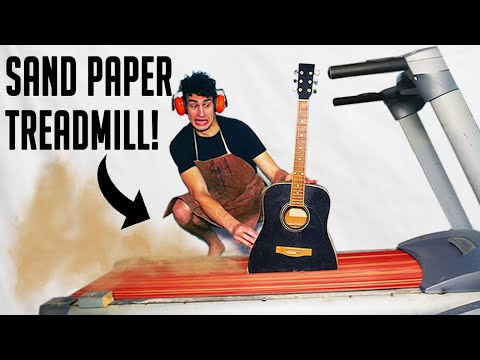 With the pure intent to connect more with his subscribers, he did what any self-respecting content creator would do – he solicited some ideas from his fans and tried his best to produce them. First was a treadmill belt sander.

The project was easy enough for Alex. He just replaced the running belt of an old treadmill with a custom-fit roll of sandpaper. This process directly turned the treadmill into a functional belt sander, thanks to the multiple speeds allowing different levels of sanding.

On the other hand, while the equipment works great as a belt sander, it seems almost impossible to use it as a treadmill. The sandpaper has way too much grip for any average person to run on it, and doing so can whittle away the bottoms of one’s footwear. Nonetheless, it’s nice to learn that it can serve as a convenient invention for woodworkers.

Alex also introduced another promising idea: a packed emergency hotdog that heats up when you snap it like a glow stick. But as soon as Alex factored in things like chemicals and packaging, it was clear why this never hit the market.

The bad thing is most, if not all, liquids that cause heated chemical reactions are poisonous. So mixing something like sodium hydroxide with water to cook a hotdog may not be the smartest thing to do. Even though the hotdog gets heated, it doesn’t taste really appetizing.

While you may not know the toy’s name, I’m sure everyone has seen those ankle hoppers before. It’s simple: you attach it to one leg and hop with the other.

The mass-marketed version is a safe children’s toy, but one of Alex’s fans decided it would be good to take the round part off and replace it with a blade, turning it into a makeshift lawnmower.

This was another easy build for Alex, as he just took a kitchen knife and strapped it to the ankle toy. However, after multiple tries, he realized how hard it was to use the invention. One would have to hop fast enough and keep the blade at the same height to cut a patch of grass effectively. That, of course, would only be impossible… unless you’re some sort of a superhuman. You could try your best, but one mistake could mean a trip to the hospital.

Chewing machines have been done before, but most of them try to mimic the look of an actual person’s mouth and teeth. It looks really gross. Alex’s version uses something more machine-like: a blender.

By cutting a hole in a blender and attaching a feeding tube, Alex could feed food into the blender and pass it directly into his mouth for easy ingestion. He secured the blender to a bike helmet, put it on, and started feeding yogurt ingredients into it.

It worked, but not that well. You can clearly see the yogurt had a hard time going down the tube and into Alex’s mouth. Plus, having a blender turned on atop his head gave Alex a splitting headache.

So that was how Alex Apollonov spent his final month of 2021: recovering from his fan’s bad ideas in hopes that he entertained them. And that he did.

You can find more of his videos on his YouTube channel, I Did A Thing. Hopefully, the holiday break will have provided him with fresh ideas for this year because I doubt he could survive another round of these fanmade projects.

This Wooden Chevrolet Silverado Is Packed With Moving Features