Banana peel is an iconic trap used for slipping up enemy racers.  We’re sure 10/10 Mario Kart video game players would agree. Just place a couple of these things behind you and watch as your opponents momentarily spin out of control – giving you the much-needed edge in a race.

But does this goofy trick work in real life?

Seeing as both go-karts and banana peels are real-world things, it only made sense for James Orgill of The Action Lab to test out the trap on a go-kart track: 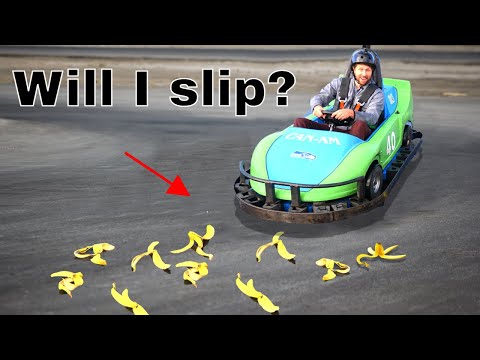 Before showing the result of his experiments, James first explained why banana peels are so slippery in the first place:

Within a banana peel is a mixture of proteins and polysaccharides (one of the most common carbohydrates found in food). When the skin breaks, it releases this slippery mixture onto the banana peel. This, coupled with the usual angle of a human’s walk, makes it extremely easy to slip on the peel if you don’t mind your footing.

But back to the go-karts! James planned two experiments:

The first experiment perfectly encapsulates what happens when a sneaky opponent gets the drop on you in Mario Kart. Armed with a bunch of banana peels, James’ wife drove a go-kart in front of his own. She then threw banana peels one by one in front of him in an attempt to slip him up. Did they succeed in this part? Well, not really.

There are a number of factors that caused the go-kart not to slip. For one thing, the go-kart they used was bigger and heavier than the person. It also had a lower center of mass and four points of contact with the ground (these being the wheels). Since the banana peel was only big enough to cover a single wheel at a time, the chance of the kart skidding out of control became pretty low.

Eager to see the go-kart crash, James began for his second experiment. This time, he placed a bunch of banana peels on a track corner. As he mentioned, it is much easier to lose control of a go-kart on a turn rather than a straightaway. He bunched up his peels in a single area and drove his go-kart around the corner multiple times.

The results were mixed, to say the least. While in some runs the go-kart definitely spun into a wall, others saw James easily regain control of the go-kart and drive on. Out of the five runs shown, there were a total of 2 slips and 3 passes.

James attributed this inconsistency to the asphalt he was driving on. Unlike the tests he performed on the smooth floor in his garage, the rocky nature of the asphalt track increased the friction between the go-kart and the road. So while the banana peels definitely made the road more slippery, it wasn’t enough to repeatedly cause the go-kart to go out of control.

It’s also worth noting that as James continued to run over the banana peels, the protein and polysaccharide mix started spreading all over the track. This would decrease the overall slipperiness of the peels and make it much easier for the go-kart to run through the track.

So there you have it. Provided you have enough banana peels in a single area, it is definitely possible to trip up your opponent’s go-kart. Just… please don’t do this on your local go-kart racing track. Not only is it considered cheating, but littering the track with banana peels makes it a nightmare for the clean-up crew.

This Vine Robot Is an Unstoppable Force With Tons of Applications