When you hear the word “unstoppable”, chances are you think of something heavy and made from a strong material. No soft stuff made from plastic would fall into that concept, you said. Well, this vine robot is going to prove you wrong.

In an interview with Derek Muller for his YouTube channel Veritasium, Dr. Elliot Hawkes, Nicholas Naclerio, Margaret Coad, and David Haggerty explained and demonstrated the capabilities of their cheap yet versatile robot. 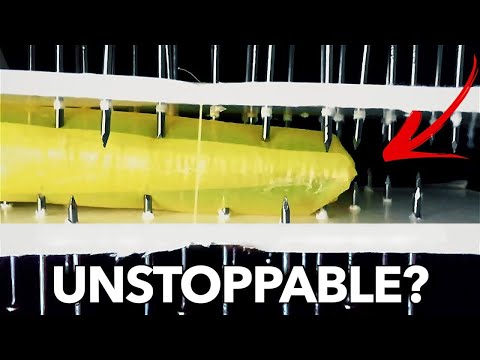 These vine robots extend using compressed air. While the base material consists of flexible tubing, the added sensors, cameras, and steering makes them full-fledged robots.

You would think that sharp objects would be the bane of an inflatable robot. But as long as you adjust the air pressure to compensate for the holes, the vine robot will power through whatever is in its way.

Unlike most robots, the vine robots are actually very cheap to make. All you need is some plastic or nylon tubing to make the body. The other accessories depend largely on what you want to use the robot for.

Want the robot to always turn a corner? Just tape the body at that specific segment. Need to lift something heavy? Adding an adjustable pocket into the body will allow the compressed air to push an object above the vine robot.

Speaking of lifting heavy objects, the compressed air allows the soft material to lift objects many times its size with just a small amount of air pressure. This makes the vine robot ideal for search and rescue operations in areas like collapsed buildings. Whereas lifting debris from above could be potentially dangerous for any trapped survivors, the vine robot can lift specific sections directly interfering with the person’s ability to escape.

Regardless of the task it’s given, the most staple parts of the vine robot are the body, the camera, and the controller.

The camera is set on an external frameset in front of the expanding body. Much like how the wheels on a roller coaster turn only on the tracks, the external frame is set on a bunch of ball bearings located inside the vine robot’s body. The bearings rotate whenever the robot changes its size, allowing the camera to stay consistently in front without falling off.

The steering mechanism of the vine robot works similarly to the body. It uses inflatable muscles which expand sideways whenever air is pushed into them. These muscles have their own air supply separate from the main body. Whenever you want the robot to turn in a specific direction, all you have to do is decrease the air pressure of the muscle on the side you want it to turn towards.

The vine robot has already seen use in archaeological exploration, as well as testing in the fields of medicine (intubation, to be more specific) and excavation. Given more time and testing, it’s inevitable that the vine robot will see practical applications in many more fields.