You’ve most likely seen videos on the Internet of people stretching numerous rubber bands over a watermelon to the point where the fruit explodes. We already know that isn’t a myth, but will the same experiment work on other fruits? 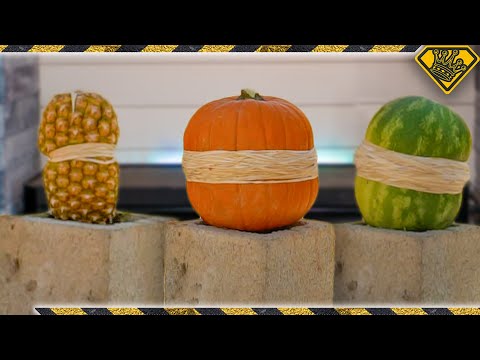 Calli and Nate from The King of Random decided to empty a supermarket of their rubber bands and use them to wrap a bunch of fruit. Aside from the tried and true watermelon, they also got their hands on a pumpkin, a pineapple, and a jackfruit. Which one will break the quickest? Only time will tell!

First off: the classic watermelon. Due to its round shape and the thickness of its skin, it’s no wonder why pioneers of the fun experiment picked it as their fruit of choice to wrap hundreds of rubber bands around.

In their test, Calli and Nate had been able to wrap over 200 rubber bands around the thing before it started changing shape. What’s interesting here however is that the initial cracks started in the areas that were bulging out – not at the area where the rubber bands were wrapped around!

Next up was the tough but relatively slim pineapple.

Since the pineapple they picked had a much smaller diameter than the watermelon, the duo decided to double wrap each rubber band around the fruit to increase the tension.

It only took 16 double wrapped rubber bands for the pineapple to start squeezing the juice out of its sides. Unlike the watermelon, this fruit didn’t explode due to its softer peel. However, the pineapple had been slowly squeezed by the rubber bands until, with a bit of help from Calli, it broke in half.

The third was the pumpkin. This one is interesting because while the outer skin of the pumpkin is pretty tough, the inside is quite hollow.

It had managed to handle a hundred or so rubber bands until they ripped the pumpkin clean in half – sending fiber and seeds everywhere. If you don’t mind the mess, this is probably one of the more interesting methods of cutting a pumpkin horizontally!

Calli and Nate did have a jackfruit lined up but, unfortunately, it rotted before they could wrap their rubber bands around it.

If you want to see more random experiments with things that will make you curious, check out Nate, Calli, and the whole crew over on The King of Random YouTube channel.