For those of us who aren’t that well-versed in the language of lock picking, a “killer key” could prevent anyone from accessing a lock ever again.

The way it accomplishes this locking process is pretty cool. Along with the biting of the killer key is a single groove that captures all the lock’s pins. There are no ramps along the biting so that when someone tries to remove the key, it secures itself to the pins of the lock – ensuring you can’t pull it out. To make things even harder, an excessive amount of force can cause the bow of the key to snap off, effectively jamming the rest of the key inside.

Killer keys are a great tool for landlords who want to keep previous tenants out while they change the locks on their doors, or for law enforcement officials who want to easily deny entry of an area for criminals.

But are they as foolproof as their manufacturers say they are? 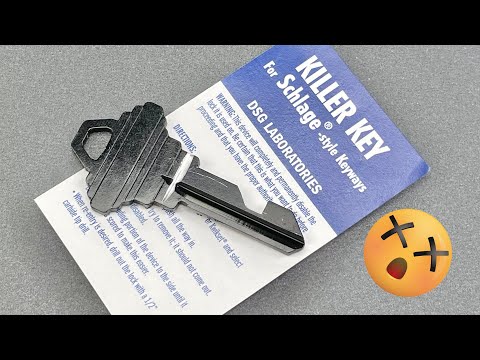 Recently, the LockPicking Lawyer used his lock picking expertise on a killer key which was anonymously sent to him. However, as it turned out, killer keys aren’t really a “killer” in the hands of knowledgeable folks.

Once you know how they work, all you need is a special tool to lift the pins and pull them out. In the case of the LockPicking Lawyer, he modified one of his notched decoders by adding a little tiny bump on the side of the blade. While the decoder had been lifting the pins, the barb grabbed onto the killer key and successfully removed it from the lock.

As for all of his videos, the LockPicking Lawyer worked his magic at least twice to show everyone his methods aren’t just a product of luck. He also mentioned in this video that killer keys will not slow down someone with the proper tools. According to him, you can even just drill out the cylinder on your door lock should you find one of these inside it. Again, all you need is the right instrument OR a well-versed locksmith.

To see more so-called “impenetrable locks” get their defenses put to the test, check out the LockPicking Lawyer’s YouTube channel.