Seeing that we’re in the midst of a pandemic, it isn’t that far-fetched to think that a nuclear holocaust might be the next thing for the human race. When nuclear missiles fall from the sky, it’s time to hunker down in your fallout shelter (You do have one, right?) and prepare for the worst.

But what happens after the bombs have dropped? With nuclear fallout being the foreboding problem, Matthew Patrick of The Food Theorists decided to find out how a man can feed himself in a post-apocalyptic world. 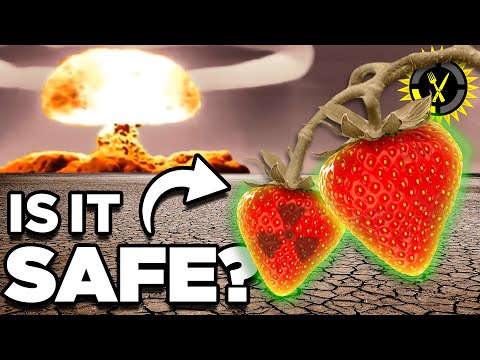 There are two classifications of radiation: ionizing and non-ionizing. Ionizing radiation contains enough energy to remove the electrons from molecules whereas the non-ionizing variant does not. Long story short: ionizing bad, non-ionizing good.

You would think that as long as the food isn’t hit by this ionizing radiation then it’s good to eat. Well, you’re wrong.

See, there is a difference between radioactive and irradiated objects. “Radioactive” means that the object you are referring to emits its own radiation. This makes it extremely harmful for you to get close to radioactive food without proper protection, much less eat it.

“Irradiated” means the object was hit by radiation but is not a source of it. MatPat (Patrick’s screen name) explained that quite a lot of food you eat today has been irradiated to remove bacteria and contaminants. This allows them to be stored for months and even years at a time.

The biggest issue with nuclear war is that after the bombs have gone off, they cake the surrounding areas with nuclear fallout (one of the worst kinds of ionizing radiation). This stuff gets everywhere – the air, the water, and especially the ground. This makes it extremely hard for living things to survive.

Nonetheless, even with nuclear fallout scattered everywhere, it is still possible to plant and grow crops. The problem is, these crops can carry radioactive material themselves. This is due to the soil and water they would use to take in nutrients. Radioactive soil and radioactive water equate to radioactive plants and produce.

The Chernobyl nuclear accident of 1986 is a good point of reference for this situation. There, it was found that edible plants in the area are radioactive and not fit for human consumption. To add to this, animals who ate irradiated flora in certain parts of Norway affected by the accident have to be scanned for radiation before they can be eaten. This process goes on to this very day, almost 35 years after the accident.

With both animals and plants affected by nuclear fallout, just how are we supposed to live in a post-apocalypse?

MatPat said that the answer is simpler than we thought. By carefully removing 5-10 inches of irradiated topsoil, you can clean out the ground of any radiation. That is what people in Fukushima, Japan did following the Fukushima Daiichi nuclear accident of 2011.

So while you can eat canned foods pretty easily after a nuclear explosion, be careful when picking or growing food of your own. Make sure the animals you are about to raise wouldn’t get the chance to eat anything irradiated. Only plant your fruits and vegetables once you’ve removed the layers of irradiated topsoil. And for goodness’ sake, don’t eat anything that glows!