Even if you don’t have the essential appliances, it’s easy to cook at home. I mean, it’s one of the places you would surely find something edible in the first place.

Despite the heavy equipment inside of it, there is a surprising lack of cooking apparatus inside this monstrous vehicle. So, how did a platoon of soldiers piloting a British main battle tank feed themselves? 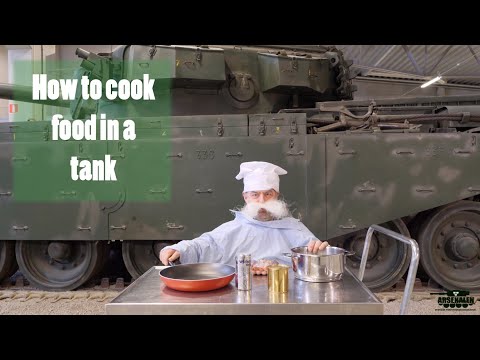 Stefan Karlsson, current director at the Arsenalen tank museum in Sweden and a former platoon commander on a Centurion tank, shared his firsthand culinary experiences in the field.

Ingredients for making food and drinks were given to soldiers as standard issue. Coffee beans, tea leaves, and seemingly infinite varieties of packed and canned goods were the norm for the Swedish army.

Unfortunately, the tools with which to cook the said food items weren’t as diverse. Karlsson stated that they were given a few cups (some of which were foldable), a canteen, and pocket utensils.

Platoons inside a tank seemed to fare a little better. They were provided a modified cooking pot which would connect to the tank’s battery via an electrical cable. The pot would need 700 W of power to properly cook anything. To ensure the battery wouldn’t die out, the pot could only be turned on when either the engine or the generator was running.

You would think this pot solved a lot of the soldiers’ cooking problems, but Karlsson stated that his platoon rarely used the pot for cooking meals. Pouring any sort of food inside would require them to clean the pot afterwards (not to mention the mess liquid dishes would make when the tank was on the move). With that, they instead used the pot for boiling water for coffee and tea instead.

Necessity breeds innovation. Since Karlsson and his team had to cook their solid food without constantly dirtying their only cooking pot, they looked to the other parts of the tank for their solution.

Let us take this hulking mass of a vehicle as an example. Humming and extruding excessive amounts of heat, it should be enough to warm a person. So why not use that heat for something far more useful?

By removing the vent covering the tank’s radiator, they effectively created a makeshift oven/microwave set at a constant 80° C (or 176° F). All they had to do was pop their canned goods inside a standard issue tin box, carefully put the said box on top of the radiator, and close the vent.

After about an hour or so of letting the engine run, you would have yourself a tin full of well-cooked canned food. Apart from not having to clean the tin afterwards, the biggest advantage of using the radiator as a makeshift microwave is that you could use it whilst the tank was on the move.

Soldiers back in the Second World War would cook eggs on top of their tanks’ exhausts, so Karlsson thought of doing the same thing with sausages. He would wrap a number of sausages in tin foil and carefully place them just under the tank’s exhaust.

Unlike cooking with the radiator, this method would require two hot metal plates pressing against the sausages. This would evenly cook the meat on both sides and made prep time much faster. You would only need to wait 15-20 minutes before you remove the foil from its hidden alcove and enjoy the meaty goodness inside.

They aren’t exactly on par with what you would get at a gourmet restaurant, but you take what you can get in the middle of a battlefield.