Despite all the things you can make with it, LEGO is still made out of plastic. And plastic, on its own, isn’t very strong.

The Brick Experiment Channel has been putting LEGO pieces through the wringer for as long as it has existed. This time, however, they wanted to see if the Danish building toys can be used to break an aluminum beam. 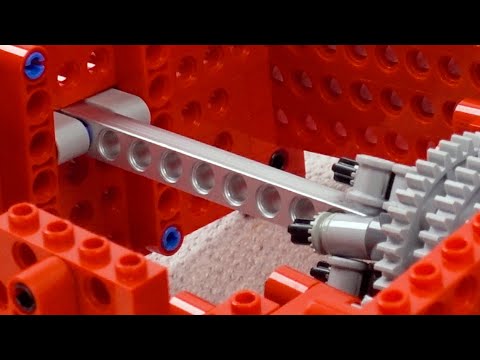 The aluminum beam used for the experiment was a 15-hole, custom LEGO-compatible beam measuring 120 mm in length.

The first tests were done using a two-motor system with the aluminum beam placed between them. With 3.3 Nm of torque applied, the aluminum beam didn’t even budge. Rather, the plastic pieces putting pressure on the beam started to warp and bent out of place. Changing the gears and increasing the torque to 5 Nm didn’t seem to make much of a difference either.

Only after increasing the torque to 9 Nm did they decide to go for a different approach. The gears turning the pieces snapped; putting them out of commission for any future tests or builds.

Plan B didn’t fare so well, either. Since the smaller gears have a tendency to break, you would think using bigger gears would be the answer to the problem.

Unfortunately, the problem with the bigger gears is that they have a tendency to slip if there aren’t many connecting pieces around them. Even with four motors powering this new setup, you can’t expect the aluminum beam to break if the gears aren’t turning properly.

After the previous builds’ failures, a LEGO crank with a single motor was created. Using a large number of LEGOs as counterweights and with enough torque, the aluminum beam started to bend at 12 Nm.

The beam only got easier to bend as more torque was applied. Adding 20 Nm caused visible warping on the beam and while it didn’t break, it would be harder to slot this piece in between other LEGO pieces.

Since the beam started to bend with a single crank, it only made sense that a double crank would get the aluminum beam to finally snap.

By increasing the torque from 20-30 Nm, you start to see the aluminum bend to its LEGO masters. A couple of adjustments to the string on the cranks were needed to continuously rotate the beam but with enough time and patience, the aluminum finally broke from the force.

Thanks to the support beams and their compact arrangement, the LEGO pieces hardly had any signs of wear on them, much less damage. The aluminum beam, on the other hand, is completely destroyed – yet another foreign material lost to the majesty of LEGO.

Restoring This Comically Large Wooden Hammer Is No Cartoon Joke