When it comes to watching videos of wood products come to life, leave it up to artisanal wood craftsman Frank Howarth and his creative camera work to be among the most entertaining.

The YouTube artisanal craft star picked up an obsession with both woodworking and filmmaking soon after retiring from architecture in the heavily-forested portion of Portland, Oregon’s Forest Park area – a fitting location for one of the most impressive self-built personal wood shops we’ve ever seen.

While Howarth has worked on dozens of personal projects that he highlights in-full from raw material to finished product on his YouTube channel, it is perhaps his larger projects that are the most interesting.

Among one of the more recent product orders he has had to deliver was a set of sake trays to a local Portland, Oregon Japanese restaurant that wanted a “more rustic” feel than what they were currently using.

“I was asked to design and build wooden sake trays for a new Japanese restaurant,” said Howarth. “The client asked for something a little more rustic than what they were using. My first prototype was too big and too rustic, and it did not have an under cut on the bottom edge so it could be easily picked up. The second prototype had the right form but I did not have a good solution for making the holes in the top to receive the glasses. The third prototype, that was approved by the client, was made from a top piece of rough walnut and a smooth, rectangular bottom piece of walnut. I drilled three holes in the top piece to receive the glasses. The two pieces were glued together to make the final form.” 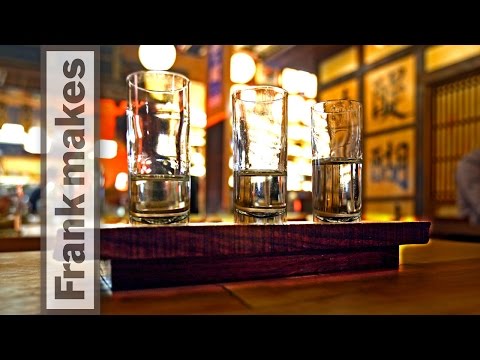 It’s hard to convince somebody to watch a video of a guy drilling three holes into a piece of wood, but when it comes to Howarth, the process documentation results are oftentimes just as satisfying as the final product.

To try the sake trays out for yourself, they are located at Bamboo Izakaya in Portland, Oregon’s NE Alberta neighborhood.