Although the sport of lacrosse may elicit thoughts of East Coast prep schools, the game was in fact invented by a confederacy of six Native American nations – the Iroquois – whose territory once stretched from Lake Erie in the west to Lake Champlain in the east.

Unlike the contemporary lacrosse sticks of today that are manufactured from various lightweight metals and injection molded plastics, traditional lacrosse sticks were crafted by hand from hickory trees using a steam bending process to achieve the shape of the “head” of the stick. While the contemporary sticks made with advanced materials might be the popular choice for most who are new to the sport, hand crafted wooden sticks are still commonly used by many traditional players as well as box (indoor) lacrosse players and in women’s field lacrosse.

Among others who are crafting these sticks in the same traditional way as his ancestors is Québec-based Lewis Mitchell. Here, Mitchell goes behind the process of creating a wooden lacrosse stick from scratch and why he feels it’s important to keep the craft of traditional lacrosse stick making alive: 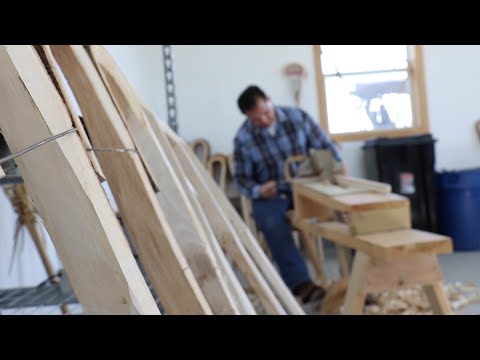 For those in the market for a wooden lacrosse stick, Lewis can be reached by email.