Some of the best conceptual manufacturing equipment designs that we’ve seen over the past few years have involved altering traditional processes into more simplified approaches that strip away the complexities in favor of the bare minimum. Among others that come to mind instantly is Dave Hakkens’ Precious Plastic project – where he has simplified traditional plastic manufacturing processes including injection and rotational molding into open source designs that anybody can build and produce objects using recycled plastic.

More recently, France-based deFact Studio has created their own simplified manufacturing device that closely mimics a mechanical ceramic RAM process, however their version uses little more than some objects that are commonly found in a hardware store.

In a traditional RAM process, a mechanical hydraulic press compresses clay into permeable dies to create multiples quickly and consistently. Following the pressing process, the object is released through either air or fluid pressure forced through the permeable die. The process is commonly used by larger ceramic product manufacturers and can include the production of products ranging from large planter pots to smaller coffee mugs: 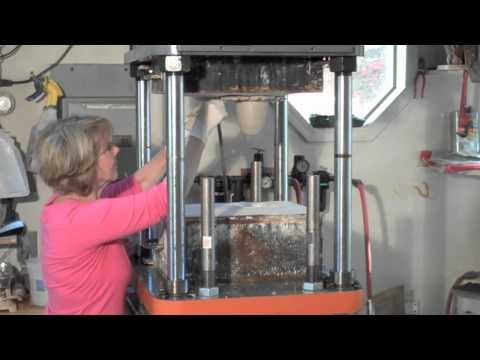 For Copy/Pour, deFact Studio created a similar device that incorporates a pre-determined shape screwed onto a press that is then driven into any number of earth materials ranging from soil to sand. Rather than clay, the designers have chosen to use plaster which helps create a striking contrast between the bright wares themselves and the subsequently attached earth material that resulted from the process:

The device also brings to mind Max Lamb’s Hexagonal Pewter Stool, which was made by pouring molten pewter into a sand mold that was crafted by hand directly on an ocean beach in Cornwall, England. Once the sand pewter had cooled, the sand was dug away to reveal the final stool design:

While the soil-infused designs may not appeal to everybody’s taste, it’s hard to argue that the project is a perfect blend of earth and industry – something that’s a nice contrast amongst our existing sea of dollar store plastics and disposable gadgets.

Be sure to check out the rest of the studio’s designs – including an emergency chocolate kit – over at deFact Studio.