Although Kickstarter has been responsible for churning out successful product after successful product, what happens to a Kickstarter campaign page after a product launches has been…pretty much nothing. Thanks to the popularity of some projects, the SEO for any search of said product is likely to bring up the Kickstarter page first (go ahead, try it) even long after a project creator has established their own online presence.

While this isn’t the end of the world, it leaves little room for a newly-established brand to communicate who they are outside of the cut and dry aesthetic of the Kickstarter platform – which is designed to give all projects a leveled playing field. Additionally, any updates (and there are many when it comes to fulfillment) are shoved into the ‘Update’ category of the page that isn’t necessarily as intuitive as one would expect…especially when potentially thousands of users are wondering where their shipment is.

“Funding is just the beginning.”

In an effort to further expand their platform for successful campaigns, Kickstarter has just released their new Spotlight feature that allows project creators to customize their page much more than they were previously able to in order to help tell their brand’s story long after the campaign has ended.

“After watching more than 80,000 new creations take off on Kickstarter, we know that a project doesn’t stop at funding,” said Kickstarter in their announcement.

“We’ve seen projects go on to win Oscars, open restaurants, send satellites to space, and become a part of the Museum of Modern Art’s permanent collection. We’ve watched tens of thousands of projects come to life. Every one of them has a story of its own — and we want to help creators share those stories with the world.” 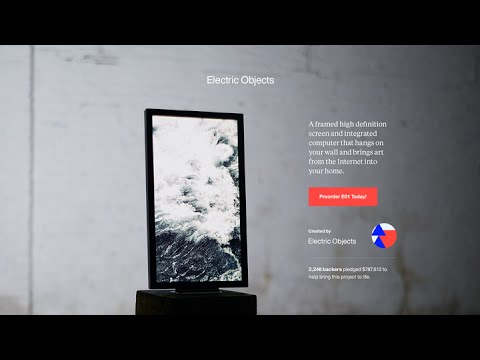 The new features allows project creators to – similar to Squarespace – customize pre-set parameters for creating a fully-responsive and aesthetically-pleasing design with their provided project assets including photos, sketches and any other imagery that helps highlight the process of bringing the product to life. Kickstarter is calling these new Spotlight pages “living, breathing home pages for (projects)” that can also be linked to newly-established websites that became the home for a brand after a successful Kickstarter launch.

While this is great news for project creators who understandably want to move beyond their Kickstarter roots where their pages look the same as everybody else’s (especially where SEO is concerned), it is also great news for backers and ‘explorers’ who are seeking more information about the product or are looking for inspiration behind how the project became successful. A highlight of Spotlight will be on sharing a creative process to further tell the story of how the product came to life.

Could this be the beginning of Kickstarter becoming an all-in-one product launch and hosting platform? Only time will tell, but if one thing’s for certain…they’re on the right track for creating an even more appealing springboard for those looking to make something out of that napkin sketch.

Explore what others have done with Spotlight already by heading over to Kickstarter.

The Copy/Pour Molds Housewares out of Earth Material

Shower Power Is A Hydropowered Speaker Which Runs on Your Showerhead