The Animation Process Behind a Pixar Film

It’s almost three decades since Pixar released Toy Story 1, its first animated feature-length film. Since then, animation on the digital frontier has progressed in leaps and bounds.

And yet, some things never change. 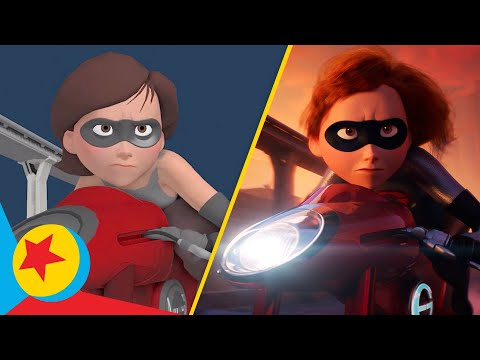 In a recent video posted on the company’s YouTube channel, we got a behind-the-scenes look at what it took to produce a scene from their 2018 animated superhero movie, Incredibles 2.

Just like what they did with Toy Story all those years ago, it all started with hand-drawn storyboards. While the animators didn’t use them in the final product, storyboards helped to map out the shots and the flow of the scenes the way the producers wanted them to be.

Once everything was in place, animation started previsualizing on computers. And just like in other projects, the Incredibles 2 animation involved creating a simple but accurate representation of the scene. It includes all the characters, props, backdrops, and adding audio to the mix.

As more elements got added into the scene, the whole film team tried to figure out a layout for the camera and shots. After all, what good is all that animation if you cannot capture it in just the right way?

Finding out the proper placement of the camera would allow the animators to fine-tune their work. Animations for each main character then received further emphasis and depth, such as their facial expressions and movements.

This part will teach you that main stars aren’t the only ones who deserve special treatment. All extra characters in various scenes of Incredibles 2 also acquired the same amount of care and attention. This process prevented the dissonance between them and the main characters in any part of the movie.

Care and attention bring us to the process of simulation. Toy Story had some pretty static hair and cloth simulation, but the past two decades allowed Pixar to take things to new heights. Incredibles 2 features almost realistic simulations – from hair and cloth sims to water effects and light reflections.

Once all of those elements were good, the team implemented one final lighting round to make everything in the shot look cohesive and part of a collective whole. It might look like just a few steps, but the whole process took a lot of time and effort to make each scene look perfect. So the next time you tune in to watch a Pixar animated film, be sure to give the animators behind it some praise. They worked hard on that!