I’ve seen some strange things encased in resin, and YouTuber Jedrek29t’s creations are always on top of that list. He’s already fossilized a McDonald’s cheeseburger and French fries, so how much weirder can he get?

How about encasing a bullet shot through an egg? 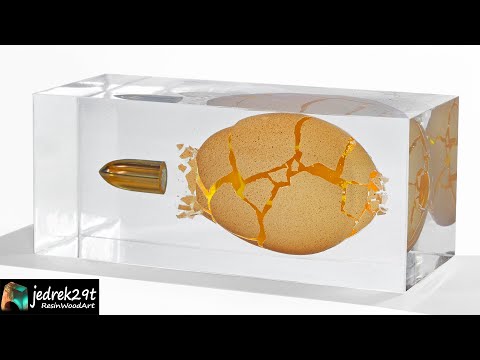 Now, to be honest, that cylindrical piece of metal you see in the final product isn’t an actual bullet: it’s just a piece of brass lathed to look like one. And that shattered egg? That’s the result of two eggs molded and combined to make an illusion.

But I’m getting ahead of myself. Let’s break each part down, shall we?

As mentioned earlier, the shattered egg is the end product of two eggs: the first egg makes up the silicone mold and the second uses its eggshell for the effects.

After using the silicone mold to create a yellowed resin egg, Jedrek29t covered the hardened resin with shell fragments from the second egg. You may have noticed he kept the resined segments of the glue sticks uncolored. This part was intentional to project the scene of a bullet’s trajectory passing through the resin egg.

What Makes the Bullet?

If you think about it, any bullet is just a hollowed piece of metal filled with gunpowder. Take away the powder, and all you need to make a fake bullet is a piece of metal shaped to look like one.

In this case, Jedrek took a brass roller and used his metal lathe to give it that dangerous bullet shape. After tons of filing, sanding, and polish, the piece was ready to fit on top of the resin egg.

Encasing Everything in Resin

The yellow tinge of the resin egg is indeed visible. While it looks odd, this appearance helps differentiate the egg’s inside from the rest of the finished product.

The transparent resin mimicking the bullet’s trajectory, on the other hand, looks almost invisible to the naked eye when encased in another layer of resin. You can barely see the part connecting the bullet to the egg.

It’s like unveiling the secret behind a magic trick. You think this would be a complex project, but it becomes much easier to understand once Jedrek29t reveals his thought process. You can find all of Jedrek29t’s awesome resin art on his YouTube channel if you want more fun projects like this.

The Animation Process Behind a Pixar Film