Normally when you have a problem with your roommate, you do the civilized thing and have a nice talk with them. You sit down, lay down the issues at hand, and hopefully come to a compromise.

William Osman tried talking to his roommate Mike about the noise of his feet when walking through the living room. But after being stood up for a Minecraft session, Osman decided the best way for his friend to get the point was by electrifying the carpet in the shared space. 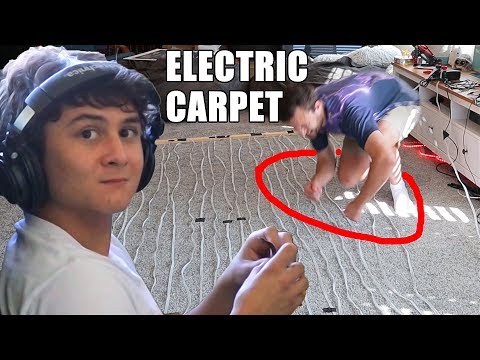 Making a sound-sensitive electric carpet requires a couple of things:

As the floor is hit, a single relay activates a harmless red LED strip. If the number of signals is above a certain threshold, a second relay turns on a very harmful electric fence.

The first fence Osman bought proved to be too powerful for the lesson he wanted to teach Mike. It even fried one of the Arduinos. There’s only so much electricity a human can handle before they think a prank has gone too far.

So instead of using the biggest, most powerful fence he could find, Osman returned it to the hardware store for a slightly less dangerous one. He hooked it to his setup and spread the fence over the living room carpet.

Strands of the fence were spread across two pieces of wood. Osman arranged it in such a way that the positively charged fences alternated with the ground ones. In this, when a person steps on both a positive and a ground charge at the same time, it will send a current through that unfortunate person’s body.

With the fence set and tested, all that’s left to do is to lure in some unsuspecting prey. Osman readied some delicious Spam musubi for Mike at the far end of the living room. Eager to get his hands on them, Mike braved the electrified carpet and got himself a good shock for his troubles.

The food itself wasn’t worth the trouble, but at least it proved Osman’s project worked! I really wish he found a way to hide the electrified fence under the carpet while still providing the same voltage, but that might be a project for another day.

Charring Raw Meat With Matchstick Volcano and Some Sparklers