Though my office chair provides great comfort, there are times I would rather stand whilst working.

Think about it: you get better blood flow when you do this. You’ll be more awake and alert which helps you get away from that tempting afternoon nap. Not to just that! Also, consider the amount of exercise your legs would get when you are actually using them!

Inventor Matty Benedetto seems to think that standing is the future in the workplace. He already created a standing keyboard – a keyboard specially designed to be used on a standing desk. So why not make a standing mouse as well? 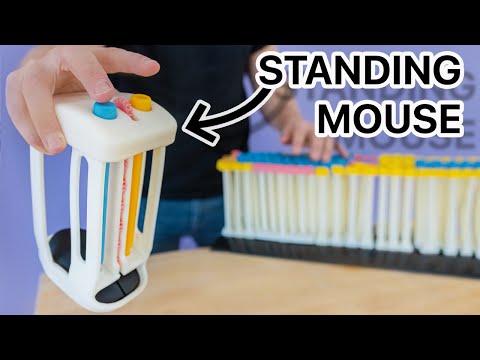 Unlike the standing keyboard which just extends the existing mechanism of a standard keyboard’s keys, a standing mouse poses some new, rodent-related problems.

To make sure the mouse’s laser pointer can still sense movement, Matty 3D printed a special bracket to house a standard mouse. This bracket will serve as the base on which everything else will be built on top of.

Now that the mouse can sense movement, the hard part is getting mouse buttons to work. For the left and right click buttons to properly register, Matty designed two spring levers (one yellow and one blue respectively) in Fusion 360. When pressed, these levers push down on the mouse’s buttons, activating them.

So far, Matty’s standing mouse has ideas inspired by his standing keyboard. But this is where it gets interesting. Since the scroll wheel cannot be pressed to activate its main function, Matty thought of an ingenious way of getting the part to move.

Using 3D printed gears stacked vertically atop each other, he can easily reach the scroll wheel at the bottom. While his first set of gears might not have worked (the small number of teeth in the gears reduced their overall effectiveness), his second, more traditional gear set worked just fine.

All of the pieces – that includes the buttons, gears, and base – are 3D printed using resin. To give pieces their respective colors, Matty simply mixed the appropriate pigment with the resin.

And it works just fine! What did you expect? It’s just an extension of an existing mouse which makes it more vertically adaptable. The buttons work like a charm, but it’s nice to know Matty accounted for the grooves in the scroll wheel when making the gears, as well.

You can find more of Matty’s quirky but totally viable projects on his YouTube channel, Unnecessary Inventions.