Charring Raw Meat With Matchstick Volcano and Some Sparklers

We’ve seen a matchstick volcano before, but that one was made for the sole purpose of burning a hole in the ozone layer. This volcano by Lavina would serve a higher purpose: to feed the hungry belly of its creator. 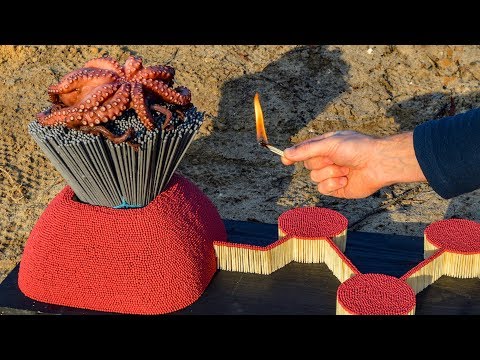 Unlike most matchstick projects, this volcano was made using a combination of matches and sparklers. While the cone of the volcano and the trail leading to it were made of matchsticks, the inside was filled with hundreds of sparklers.

Their mission: to cook a whole octopus placed on top of the volcano.

Lavina started out this project by preparing a board of wood. On the dark-colored side, he outlined the areas in which he wanted to place the matches.

The matchstick trail was designed to begin on one corner and to move to the other side, where it would connect to a circular node comprised of multiple matchsticks. Lavina repeated this pattern four more times, resulting in five total matchstick nodes connected by five matchstick trails.

At the final node, he created a shorter matchstick trail leading to the main event: a giant matchstick volcano filled with sparklers. These fireworks Lavina made, much like the ones you see kids play with during the holidays, were too big to fit into the volcano’s outer shell. So Lavina tied them up into a lovely bouquet and plopped it into the giant crater at the top.

With his matchstick art complete, he wrapped a whole seasoned octopus (a small one, mind you) in foil and placed it on top of the sparklers. All that was left to do after that was to light up the first match on the opposite end of the volcano and watch it all burn!

It’s surprising to see that no matter how big the flames got, they never jumped the gun and prematurely ignited the matches down the line. They always followed the arranged order, burning steadily down the trails while erupting in large bursts when they reached each node.

After some time passed, the flames reached their final destination: the volcano. In the beginning, it looked like only the matches making up the outer shell of the volcano were ignited. But as soon as those burned out, the sparklers lit up like New Year’s Day.

Both the flames from the matches and the sparklers engulfed the foiled octopus – thoroughly charring it to the point of inedibility. Even so, Lavina took the now exposed octopus (the fire completely burned away its foil protection) and plated it with some vegetables and ketchup.

You never see him actually eat the octopus, though. I wouldn’t blame him. With all the fumes and chemicals from those sparklers, that octopus might taste just like a firecracker. Still, he definitely proved you can char raw meat with enough matches and some chemical firepower.