Officially, the only way you can make your Hot Wheels cars go faster on a track is by using some variation of a Hot Wheels Track Booster – a unique track piece with two spinning wheels that rev up your cars as they pass through. 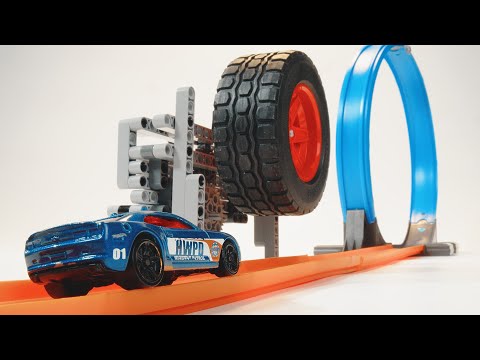 Now, you could spend money on this official piece, but where’s the fun in that? As YouTube channel Dr. Engine shows, you can totally make an overpowered booster using LEGO Technic pieces.

Dr. Engine’s first booster model consisted of two LEGO wheels mounted vertically over a piece of Hot Wheels track. It required different LEGO pieces and Hot Wheels car sizes to get the clearance between the track and the wheel just right. When a toy car was passing through the said booster, it would lightly skim the bottom of the LEGO wheel and give it a slight boost.

While the first model worked, it was lacking in the speed department. Dr. Engine’s second model took inspiration from the official Hot Wheels Track Booster to make it go faster, meaning the LEGO Technic wheels were on the side this time.

With a separate motor connected to each wheel, you would expect double the drag on the toy car. Changing the orientation of the wheels didn’t do much to speed up the car, but Dr. Engine had another idea.

Going back to the first model, he increased the number and size of the gears connected to the motor. This increased the booster’s overall RPM and would launch the Hot Wheels cars off the track.

Dr. Engine brought out the big guns when the cars started moving faster. The final booster model used a much more giant wheel and a more sophisticated gear mechanism. With four motors powering this beast of a machine, there was no way any toy car launched from this thing would stay on the track.

But that didn’t seem to be his intention. After seeing what the launched cars did to a looped track, Dr. Engine decided to forego any calibration and turn his booster into a catapult.

He modified the track to launch Hot Wheels cars directly at a wall of plastic bricks. Using the second prototype as a stopper for the cars, he fed them one by one into the big booster and watched them bust through the wall.

With a bit of tweaking of the engines and gears, you could reduce the speed of Dr. Engine’s boosters to race your Hot Wheels cars at a more acceptable pace. Or you could just follow his example and launch your toy cars at things. Either way, both make for very entertaining Hot Wheels tracks.

Wood-turning a Double-Helix Goblet Is One Arduous Project

This Functional Keyboard Is Taped to a Piece of Cardboard