Wood-turning a Double-Helix Goblet Is One Arduous Project

We’ve featured tons of wood-turned pieces on SolidSmack before, but never something as complicated as a double-helix goblet. 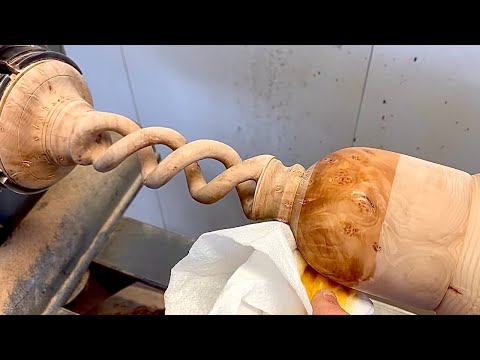 Earlier this year, YouTube channel Jack Mack Woodturning decided to turn an old piece of applewood into a goblet. The wood was a tad long, but instead of whittling it down, Jack Mack rolled with the punches and made the handle fancier (and longer) than intended.

He started by cutting the raw apple wood into a workable piece. He then took the wood to his lathe and hollowed out one side to make the bowl. To make it look more like a goblet, he used his woodworking tools to shape the outer side of the wood. After sanding it down, and he got a fine-looking goblet top!

That was the part where things started to be interesting. According to Jack, he didn’t intend to give the goblet handle a double-helix design.

Early in the video, his initial plan was to make a very long handle for the goblet. The double-helix idea resulted after some parts of the handle chipped away, and he found out that was the best shape for the wood.

After this epiphany had struck, he started marking the handle to divide it into segments. He shaded out the parts he wanted to remove and took his rotary tool to start shaping the handle.

The Most Overworked Rotary Tool Ever

It must have taken him hours, if not days, to finish the double-helix shape since rotary tools are meant for drilling off tiny bits of material, not entire chunks of wood. And thanks to the power of video editing, we can catch this whole process in just a few minutes.

With the goblet’s shape finalized, it was time to give it a good sanding and finish. Jack Mack then removed the base from the excess wood and sanded it down to complete his ornate goblet.

This piece would be great at parties due to its mesmerizing form and look. Yet, holding the handle and cleaning it might be a bit difficult. Nonetheless, it will undoubtedly be a great decorative piece for any table!