At first, I thought giant mallets only existed in cartoons and video games. As it turns out, they can be found in real life, as well.

After finding an old one at a flea market for 25 Euros (roughly 30 USD), YouTube restorer TysyTube Resotration bought this giant wooden hammer and spent a week restoring it to its former smashing glory: 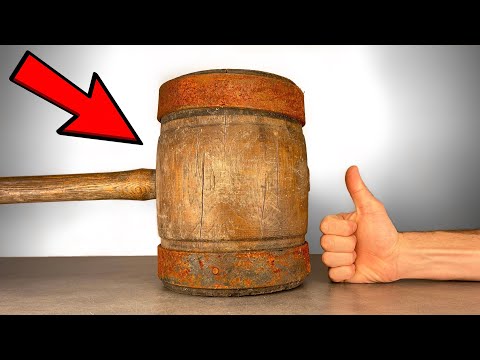 After disassembling the hammer into its core components, he sandblasted the head and metal rings to prepare them for the restoration process.

The only non-wooden parts of this oversized weapon are the two metal rings on either side of the mallet head. TysyTube covered the sandblasted rings in oil before polishing them to prevent further rusting. Once the oil set in, he used a grinder and polisher to bring back the shine to the once rusty metal.

To give the rings some texture, he used a drill bit to carve some engravings. This feat took a lot of time and effort to make. While it wasn’t essential for the mallet, they definitely give it that extra layer of interesting detail.

Cleaning the Mallet Head and Handle

Undoubtedly the biggest parts of the mallet are the giant head and the handle. TysyTube took the sandblasted mallet head and sanded it to smoothen down the uneven surfaces. While it wasn’t sandblasted, the handle, on the other hand, got a sanding.

The wood itself is obviously aged. To clean it, he coated the wood pieces with a mixture of oxalic acid and water. After applying three applications of the acid/water mixture, he left both the head and handle to dry before washing and scrubbing them down.

To help the wood dry faster and to let the mixture sink in, an infrared lamp was shined on the mallet head and handle.

I didn’t think you would need epoxy resin to restore something as simple as a mallet, but I was wrong!

Due to the mallet’s age and tons of use, multiple cracks and crevices have appeared all over the mallet head. These imperfections not only decrease the overall surface area of the mallet, but with enough force, they could actually contribute to the breaking of the mallet head.

To remedy this, TysyTube poured a mix of ultra diamond epoxy resin all over the mallet to cover the unwanted holes. It took him three days to fill all the spaces but once finished, he sanded off the excess resin to make it smooth.

Before reassembling the wood, TysyTube had to first apply some hard base primer and sealant to the mallet and handle. Once they dried, all the parts of the mallet were gathered and were put together again.

With a few nails and a couple of whacks from some smaller hammers, the giant hammer is finally complete. Compared to when TysyTube bought it from the flea market, this restored hammer looks ready to break something.

It can smash junk food and eggs pretty easily, so who’s to say it can’t stomp on some plastic animals at the arcade?

Make Your Own Censor Button With a Headphone Speaker, a Pill Bottle, and a Circuit Board