Despite what your parents might have told you when you were young, swearing can actually be a good thing! It relieves stress without having to resort to physical violence, allows you to get your point faster, and widens your vocabulary. What’s not to love?!

But even with all these benefits, there are quite a number of people who are still sensitive to certain kinds of… colorful language. So how can you swear without offending the people around you? Why, make a censor button, of course! 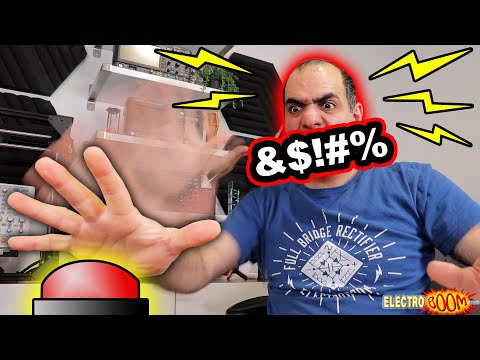 While most programmers nowadays use open-source software platforms like Arduino to produce the sound they need, Mehdi Sadaghdar would much rather use his guerrilla electrical engineering skills to make his own censor button. That, and his programming skills aren’t exactly the best.

To output the audio of the censor button, Sadaghdar repurposed an old headphone speaker. But since the sound coming from his headphone speaker was so low, he wrapped the said speaker around an old pill bottle to create a makeshift acoustic chamber.

This chamber would smoothen the transition between the speaker output and the surrounding environment. Of course, the chamber wouldn’t do any good if it’s sealed off, so Sadaghdar planned to drill a number of holes at the bottom of the pill bottle.

Due to the haphazard nature of his drilling and the weak plastic, he accidentally punched a giant hole at the bottom instead. Nonetheless, this gaping hole actually helped increase the frequency response of the speaker at 1 kilohertz.

The giant spike actually could use a bit of a boost, so Sadaghdar used some electrical tape to partially cover the hole he made and widen it just a bit more but not to the point where the hole would be too large. The end result gave him a speaker which would output sound at a higher pitch.

The volume can be further increased by adjusting the voltage passing through the speaker. Since the headphone speaker wasn’t meant to withstand that much electricity, Sadaghdar made a few more tweaks. This allowed him to get the loud sound he was looking for without frying the speaker inside the button.

With the volume output being exactly where he wanted it, Sadaghdar was able to work on the circuit board. There’s a lot of electrical engineering jargon involved, so you can watch the video for a more detailed explanation.

To put it in layman’s terms, however, the circuit board comes with a Schmitt trigger oscillator which takes a triangular frequency and converts it into a sine wave. This wave is weak, so an amplifier has to be used to bring it back to its original, high beeping volume.

Sadaghdar also added in a footswitch so he can easily activate the button whilst swearing. He set the completed censor button down, thought up something offensive to say, and…

… it worked! While it’s highly doubtful that he actually said anything offensive (his hands always seemed to cover his mouth whenever he swore), the volume and tone the censor button made were very much like the bleeps you hear on daytime television.

So there you have it. Why learn programming (which is infinitely easier to do), when you can take old electronics in your garage and make something with the same results? Mehdi Sadaghdar’s YouTube channel, ElectroBOOM, showcases his love for all things electronic. Check it out if you want to learn more about electronics while being entertained by his wacky antics.

Restoring This Comically Large Wooden Hammer Is No Cartoon Joke