Okay, I know we’ve covered flipbooks before, but those were cartoonier and based on the creator’s original content. And while it’s difficult to make your own creations, it’s just as hard recreating something all of us are familiar with.

dP Art Drawing is a New Zealand-based artist whose YouTube channel is full of drawings. Recently, they’ve been focused more on flipbooks and recreating scenes from iconic movies. Just a few days ago, they completed their longest and thickest flipbook yet – a 1,434 page book which captures key scenes between Iron Man and Thanos in the Marvel Cinematic Universe. 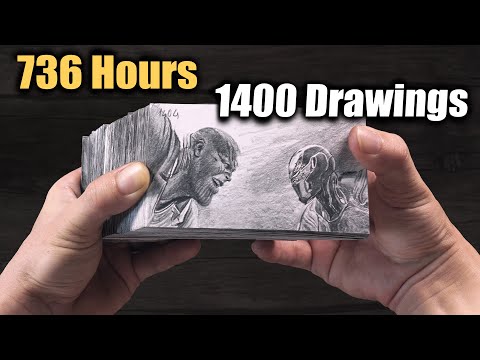 Each page starts with a rough sketch of the scene. Using the movies as a reference, the characters’ outlines are positioned differently on paper as the “camera” moves around them. Once the scene is set, the details are set in.

You’ll notice there’s a stopwatch close at hand. To keep track of how much time is actually spent sketching, a timer is turned on at the beginning of each drawing. Once the picture is complete, the timer is stopped and a new page is brought in. The timer is then resumed with the next picture ad infinitum until the entire flipbook is completed.

It’s hard enough to draw a person’s face but add in the fact that these are iconic characters portrayed by famous actors in a movie almost everyone in the world has seen and you have yourself some big expectations to meet. Not only do you have to draw such a detailed picture once, but you have to do it more than thousand times to get the animation just right.

Just to be clear, while all of the drawings feature one of two of the intricately detailed characters, the backgrounds themselves aren’t fully recreated. Maybe there’s just too much detail to be captured, but I think the reason the backgrounds aren’t fleshed out is to put more emphasis on Thanos and Iron Man.

This is all well and good in a fight scene, but thankfully when it comes to what’s happening on the battlefield (such as when Thanos’ army gets annihilated) there’s just enough detail so you see what’s happening.

It took 737 hours to make 1,434 drawings. Combined, these pictures produce a short 1-minute film. Now you know how hard it was to bring animation to life back in the day!

dP Art Drawing has tons of flipbook videos, but is dedicated to the broad field of all things drawing-related.

Reviving Broken Sculpture With Some Glue, Gold, and Kintsugi