You know what sucks? Working hundreds of hours on a project, only to have the project break right in front of you.

This is the sad reality Bobby Duke had to deal with one of his sculptures. After carving a bucket and hand sculpture and painstakingly gluing thousands of pencils to create a flowing rainbow stream, it all ended abruptly with a simple push from gravity.

The sculpture broke into pieces, and he was so upset about it that he stored all of them in a box and hid them in his closet.

This was back in July of 2019. Recently in January of 2021, Bobby Duke decided to clean out his closet and take another look at his broken sculpture: 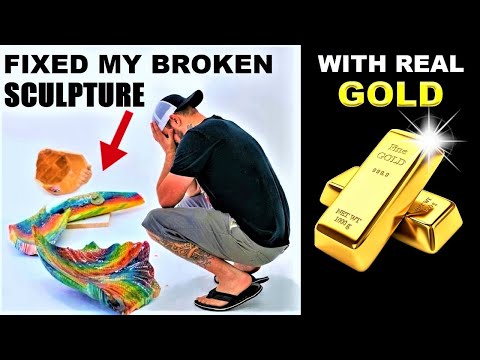 Seeing this as an opportunity to make it better, he took his fans’ suggestion of mending the sculpture with kintsugi – which is the Japanese art of repairing broken pieces and dusting them with gold to make the imperfections look intentional. The principle behind this is to make the cracks stand out and to show just how much better the piece is restored after being broken.

There’s a lot of philosophical mumbo jumbo associated with kintsugi, but we won’t delve too deep into that. Instead, let’s take a look at what Bobby Duke did to breathe life back into his broken sculpture!

Before gluing the broken hands and bucket sculpture, Bobby first performed some extra detail carving on the fingers and inside the bucket. Since he couldn’t do this when the sculpture was still whole (*sniff*), he takes the time to chisel in some extra features while using an air gun to remove the dust. As aforethought, he also drills a deep hole through the hands to make room for some LEDs, should he want to add them in later.

Then, armed with a ton of wood glue and a bit of super glue, he joins the broken pieces together and holds them in place with some ratchet straps so they can dry properly. When the glue is nice and dry, he sands the whole thing down to complete the main portion.

Fixing the resin-casted rainbow of colored pencils is going to be a little more difficult. Seeing as this is the centerpiece of the sculpture, Bobby wants to trim off the bubbly epoxy resin surrounding the rainbow before covering it in resin once again.

Starting with an angle grinder and moving to his orbital sander, Bobby smoothens out the pieces of the rainbow before taking them back to his shed, suspending them, and slathering all the pieces in a nice, thick coating of resin.

Instead of connecting the pieces of the rainbow together with gold, Bobby Duke instead wants to sand and gild the edges of the broken rainbow with a 24 karat gold leaf. By leaving the pieces separate, the gold will stand out much more and make it look like the inside of the rainbow is pure gold.

After all the sanding and gilding, Bobby then unveils his final plan. He suspends the pieces of the broken rainbow on the ceiling in order while the main bucket is mounted on a nearby wall.

You can see he decided to go through with his idea of adding LEDs inside the bucket. This helps illuminate the rainbow and bring out not just the various pencil colors, but the gold-gilded edges, as well.

It’ll be hard to bring this thing home and find a place for it, but the finale definitely is more interesting to look at than its previous life as a single-piece sculpture.

All things considered, having the sculpture break turned out to be advantageous to Bobby Duke. Just as the famed American painter Bob Ross said, “We don’t make mistakes – just happy accidents”.