Nostalgia can be a double-edged sword. It can keep you rooted in the past and help you take a good look at some valuable memories.

It’s been 30 years since Andrew “Andy” Bailey made his first-ever flipbooks as a kid. What started as a childhood obsession landed him a career as a stop-motion animator in multiple films such as ParaNorman, The Boxtrolls, and Missing Link.

Upon taking a look at his decade-old work, Andy decided to put his 30 years of experience to good use and bring his first flipbook into the 21st century. 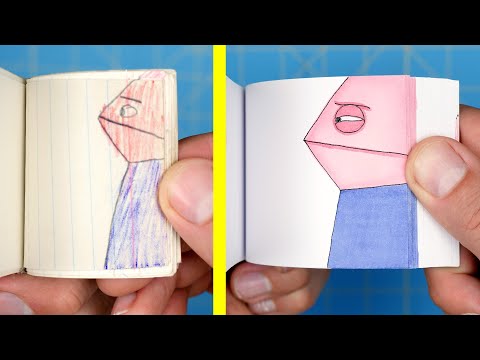 Though Andy wants to keep the general flow of the flipbook the same, he also wants to apply some of his professional animation skills to give the drawings a more fluid look.

For instance, instead of having the image of the pencil in a single flat point like in the original flipbook, Andy draws the pencil in such a way that it angles downward – making it appear like there’s an animated artist somewhere off-screen holding it.

As the sketched pencil completes its drawing, Andy changes its perspective by drawing the pencil elsewhere on the pieces of paper. You can see how he doesn’t always make his animations in a linear order.

Andy explains that it’s easier to have a stop-motion done by starting at the end of a specific scene. From there, you work backward or in reverse, as it lets you perfectly position an object or person in motion.

To hasten the animation of the pencil as it draws a line closer to the imaginary animator’s hand, Andy increases the increments where the pencil speeds up. He does this by marking the points where he wants the pencil to be visibly seen and increasing the space between those points.

He’s only been working with straight lines up to this point, so when it comes to drawing the pencil making a curve, Andy adds a similar curve to the pencil’s perspective so it looks like a human is actually in control of it.

With the pencil animation finished, Andy takes a short break before coloring his work. Using multiple markers, he applies shading and contrast which already makes this flipbook look a cut above what he made years ago. This isn’t an easy feat as he has to painstakingly color each page by hand – which is why many modern animators do not fancy doing hand-drawn animation.

Once the pencil colors are set, he can finally complete his monster’s eye. Since the original flipbook had the eye-popping scenes out of nowhere, Andy creates a sort of start-up pop animation where the eye forms on the head, bulges out, and reverts back to its original size.

The final part feels like Andy just continued his work from 30 years ago. Compared to the eye-popping scene at the end of the original flipbook, this new one has the monster shifting his eye and hopping around the stage.

After finishing the drawings, all Andy has to do now is add the colors and his new, updated flipbook of The Pencil is complete. This version has way more pages, color, and animations while staying true to the original flipbook’s vision. I don’t know about Andy now, but I’m betting his younger self would be proud.