When it comes to turning objects on a lathe, crafts made of wood, resin, and paper seem to work best. This is because the materials mentioned are softer and easier to chip away with your tools piece by piece. How about a pile of push pins? 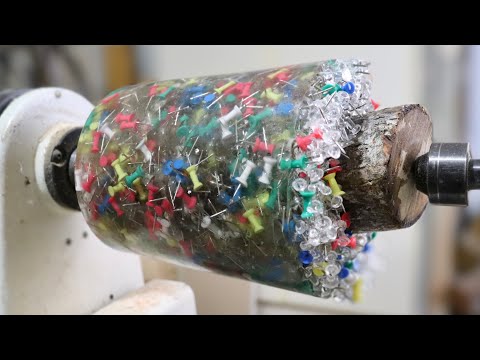 Drew from the Cook Woodworks YouTube channel has been chronicling his journey from a beginner to a slightly better woodworker. One of the projects he worked on in the past is the aforementioned push pin vase. For this project, he dumped a couple of boxes of push pins into his casting pitcher and placed a small wooden log in the middle.

After his hodgepodge of push pins, wood, resin, and hardener had dried, he took it to his lathe and began working on it.

Apparently, the main component of push pins is steel – which is very hard to cut! Drew said that he barely made a dent in the push pins and his carbide cutters almost shattered.

You can see resin and plastic from the push pin heads flying from the lathe, but not that much metal. Anyway, no one would certainly want those shards of metal flying all over the place!

Drew initially wanted to make a v-shaped vase, but the time it would take and the damage it would do to his carbide cutters would be too much for him to handle. Instead, he hollowed out the center to make a simpler vase that didn’t deviate too much from the contour of his casting pitcher.

Drew said that should he attempt to put metal on his lathe again, he would try using aluminum or some other soft metal. My advice? Don’t put ANY sort of metal onto your lathe! While the end result looks colorful, it won’t be worth it if you poke an eye out lathing the thing. That being said, stick to softer, more malleable materials!

Best Canister Vacuums for Home Use