With electric vehicles becoming more charismatic in this environment-conscious age, it’s hard not to resist the temptation to trade your normal, gas-guzzling car for one. 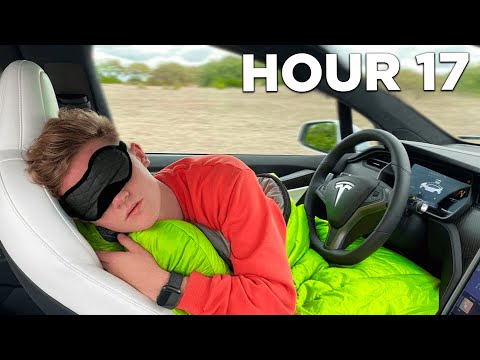 All these and more were answered by Ryan Trahan and his friends on their road trip from Texas to Chicago. Using a Tesla car (The one they used looks like a modified Model X!), they went on a cross-country drive to see just how reliable one of Elon Musk’s road babies is. To make a long story short, it was a double-edged sword.

On normal roads, the Model X’s autopilot doesn’t seem to work that well. It runs stop signs, has trouble switching lanes, and almost always needs a helping hand in navigation.

Once you get to a highway, however, the autopilot is a godsend. As long as you aren’t merging into a lane or avoiding roadwork, you can take in the scenery while your Tesla does all the heavy lifting.

You need to apply pressure on the steering wheel with your fingers to let the car know you’re still there, but the convenience of not having to be 100% focused on the highway cannot be understated.

The number of electric charging stations isn’t as abundant as normal gas stations, so the duo had to deviate quite a ways just to find a Tesla Supercharger. Thankfully, their route from Texas to Chicago had just enough Tesla Superchargers where Ryan charged up his car.

While the charges are completely free (Ryan even got a complimentary coffee just for showing his Tesla car key!), the miles they needed to take just to reach a Supercharger added hours to the Model X’s drive time. The takeaway from this is that Tesla could use more Superchargers on the road if they want their electric cars to compete with the fossil fuelled versions.

Besides the time finding charging stations, the time they spent charging the Tesla is downright ludicrous. Seven and a half hours in total just waiting for the car to charge wasted their time that could otherwise have been spent driving.

Though Ryan admitted the joy of driving into a new city with friends made the charges more bearable, he wouldn’t recommend doing a long road trip like this on an electric car.

With the autopilot enabled, driving on the highway is a breeze. And though veering off-course to charge the car for about an hour was a chore for Ryan, the team definitely enjoyed the cost-free charging from Supercharger!

Ryan also mentioned that temperature can affect Tesla’s battery life. Apparently, low temperatures drain the car’s battery faster, so he actually had to go beyond the speed limit in certain parts of the trip just to reach a Tesla Supercharger in time.

All in all, it took the team almost 28 hours on the road and a little more than 7½ hours charging the Tesla Model X. This means a total of 35 hours and 33 minutes just to get from Texas to Chicago. Compared to the 27-hour, 17-minute estimate that Google gave them prior to the trip, that’s almost an additional 10 hours. So there you have it: while a Tesla electric car appears ideal when driving in short bursts, using one for a long road trip seems pretty impractical.