You’ve seen footage of people using lathes before, but those sane individuals usually use hard, solid objects like wood or plastic to create their masterpieces.

What you don’t see so often is a person taking something flimsy like paper to a heavy-duty lathe. And yet, this is exactly what YouTube channel Wood Workshop did. Using stacks of Post-It note-like paper, will our turner’s attempt to create something sturdy succeed? Or will it be taken away by the wind like an origami crane? 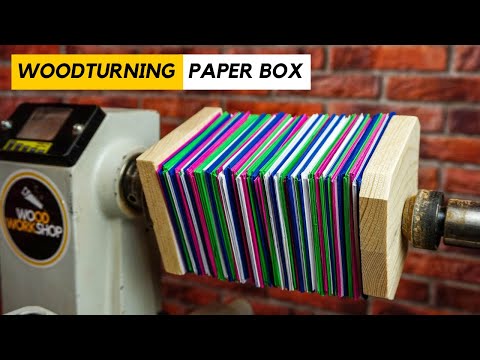 Lay On The Resin!

From the beginning, you can already see how he plans on making these pieces of paper more solid and easier to work with. With the help of a makeshift mold and a small stick, he submerges each piece of paper individually in a ton of resin.

Of course, when you drown anything in that much resin, it’s bound to be as hard as a rock once it hardens After affixing two wooden bases on either end, he pressurizes his resin creation using a clamp before leaving it to dry.

With the paper solid as a rock, it’s time to pop it from the mold and get to turning. Seeing as this is paper he’s working with, he doesn’t linger too long on a single area with his turning tools so as not to shred too much of the material. In fact, you can say more time is spent turning the wood bases on either end.

Our turner whittles down the overall diameter before popping off one of the wood bases so he can fine-tune one side of his resin-paper creation.

Do you have an idea now what this is? It’s a bit generic, but you can see he’s making a very simple wooden jar. After popping off a wood base, he sands and polishes the resin-wood before turning the lathe back on.

He starts working on making a lid. By carefully whittling down a section of the resin-wood, he uses his handsaw and cuts out a perfectly sized top for the jar. You can see him leaving a small ring of wood on both ends of the resin-wood. This allows the lid to easily pop onto the jar without causing it to fall off.

Working On The Jar

With the lid cut off, he can now empty the jar of its resin-paper contents. Using a special drill tip, he hollows out the jar before taking his woodturning tools and rounding the insides.

He also takes special care to work on the small ring which connects the lid, since a jar with no lid is an invitation for the dust to settle in. Once our turner is satisfied with his jar, he sands and polishes it for one last time before chopping off the wooden base.

Of course, you can’t forget the lid. After removing the finished jar from the lathe, the turner can focus on the last piece of his resin-paper creation.

Just as with the rest of the jar, he hollows out the inside of the lid (albeit not as much) and makes sure both the jar and the lid fit perfectly with each other. Satisfied with how his lid works and looks, he sands and polishes it for the final touch.

So to answer the question in the title: Yes. A stack of resined paper can definitely be turned into a beautiful jar. On its own, a stack of Post-Its would stand no chance against a heavy-duty lathe, but that’s what resin is for!

You can find more turning videos on the Wood Workshop YouTube channel. Some videos even involve turning materials that aren’t stationary!