Minecraft has been the source of inspiration for many creations, from in-game libraries all the way to real-life blocks. Speaking of real-life blocks, these tiny Minecraft worlds made by YouTuber WUZU clay are probably some of the smallest recreations of the video game I’ve ever seen. 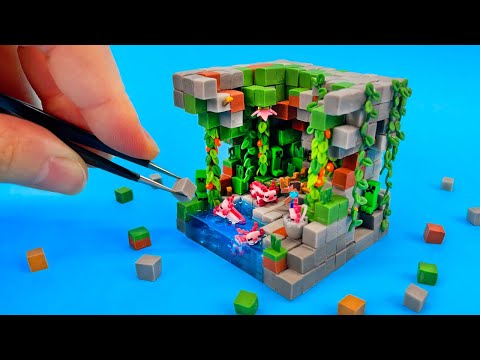 I mean, just look at this tiny cave which represents the 1.17 lush cave patch of the game. Not only it is a recreation of a tiny slice of the world made out of polymer clay, but it is also filled up with so much detail and characters that it looks like it could come to life at any moment.

To bring the blocky world of Minecraft to life, WUZU clay painstakingly sliced different colors of polymer clay with a razor blade and fitted them onto a tiny corner of plastic. The clay seemed moldable at the start but after a while, it began to harden and stick. Pieces of rock, dirt, and grass were all placed randomly by WUZU clay – some even jut out in mid-air just like in the game!

After the polymer clay had settled in, the plastic was removed and the polymer was painted with some adhesive to keep everything together.

Adding In the Flora

To bring this piece of Minecraft nature to life, WUZU clay crafted some teeny tiny (and I really mean TEENY TINY) leaves and vines out of the same polymer clay.

WUZU clay made some of the vines by molding the clay beforehand with some tools. After placing them on the cave diorama, each green leaf was carefully attached by hand onto each vine to give them some extra detail.

The other vines were crafted by twisting some polymer clay and placing multi-colored leaves on them. To cap it all off, WUZU clay placed a slightly large pink flower on top of the cave.

Bringing the Creatures of Minecraft To Life

On the other end of the spectrum, cave wildlife wouldn’t be complete without some of Minecraft’s iconic creepers.

These silent harbingers of death were made by sticking together pieces of clay blocks and drawing in their smug faces. WUZU clay made not one, but three of these annoying buggers and placed them near the Minecraft’s silent protagonist, Steve.

Speaking of Steve, he and some of the axolotls (the brand-new water creatures) were made by combining polymer clay of different sizes. Once the general shapes had been achieved, WUZU clay drew in some extra detail with a couple of markers. Seeing the creator draw in such intricate detail on such a small figure is both amazing and anxiety-inducing.

While Steve and the creepers can live just fine on land, the axolotls will need a watery place to stay.

With that in mind, WUZU clay made a tiny pool out of resin for these watery creatures to swim around in. Using a piece of plastic as a mold, WUZU clay filled out a small corner of the cave with some light blue resin and used a UV light to help it harden quicker. As an additional detail, a small water bucket was placed in the cave where an axolotl can be seen enjoying itself.

Put it all together and you have a Minecraft diorama that can be measured in inches. Thanks to its compact size, this cave can serve as the perfect tabletop companion on your computer desk as you play Minecraft on your PC. And the best part? No creepers can destroy it!

This Wheelie Trainer Will Help You Pop Some Sick Tricks