Thanks to many innovations in the tech world, prosthetic limbs are more efficient and sometimes even inexpensive, but the design is usually similar. What if you could get something vastly unique that makes you feel like a superhero? That’s where Bristol-based Open Bionics comes in.

The award winning company founded in Bristol, England aims to create low cost robotic hands for amputees, hobbyists, and researchers alike. For their current ambitious project they teamed up with Disney Accelerator, a new initiative by Disney to help innovators make their ideas a reality. They also allow select companies access to Walt Disney Company’s creative expertise and and allows their designs to be used royalty-free.

Open Bionics have taken advantage of this collaboration to bring a new line of robotic arms to the world–a Disney-inspired prosthetic arm line. What’s that? Yes, there is a sweet looking Iron Man arm. Other designs are inspired by the popular movie Frozen and the endless money-making franchise Star Wars. And these designs are not only for kids; adults can get in on the fun too. Not only do they look cool, but each arm has its own special effect: The Frozen-inspired arm glitters like Elsa, the Iron Man one has a pulsar blaster, and the Star Wars designed has a button allowing lights to change colors.

Aside from looking cool, they’re practical as well. There’s an LED system in the Iron Man hand that lights up and displays muscle signals, which allows doctors and parents to see what’s happening underneath. There’s also a vibration motor that communicates the strength of someone’s grip, but can fire a rocket causing the hand to shudder in Tony Stark fashion.

Sounds great, right? So what’s the price? Joel Gibbard, company founder, mentioned to The Independent that the prosthetics should costs less than $3000 and should be out before the end of 2016. Since the company prides itself on using 3D printing technology to create the limbs, there’s no surprise it’s so inexpensive. Gibbard also believes these stylish prosthetics will change the way people view amputees.

“The power of these prosthetics is that the public perception is completely different. All of a sudden they’re not being asked how they lost their hand, they’re being asked where they got their cool robot hand, how does it feel, and how does it work? It completely flips the perception 180 degrees. What might have been perceived as their greatest weakness is seen as their greatest strength.”

With these new Disney-inspired designs, kids and adults alike can be their own superhero or princess while giving them a huge confidence boost. Watch the video below for a look at what Open Bionics is currently capable of. 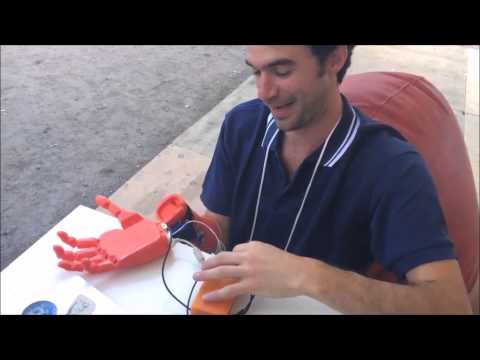 Nomad Satchel Stores All Your Design Supplies (And More)