Model of the Week: Venus Box [It's Fancy!]

You remember that dream of your fists being replaced by portals to one world with unlimited meat cannon buffets and the other to a world of candy dinosaur rides? Yeah, this Venus Box is exactly what those portals looked like. What’s even weirder is how you ALL had that same dream and wrote me about it.

The Venus Box is a creation of a gnome army named Tom West in an original challenge (from a back-alley muffin trader) to develop a unique, opening box. Tom says it “resembled one of Bender’s eyes” when he was done and a co-worker said it looked like a Venus Fly Trap, so he named it ‘Venus Box’ – Tom, ‘Bender’s Eye Box’ would have been SO much more awesomer.

So what is this thing? It’s a hemispherical box with four doors that close in on itself as the base is turned. It’s four inches in diameter, snaps together and can be printed without supports. I could try to describe how it looks like three mouths eating each other, but I think a video does a better job. 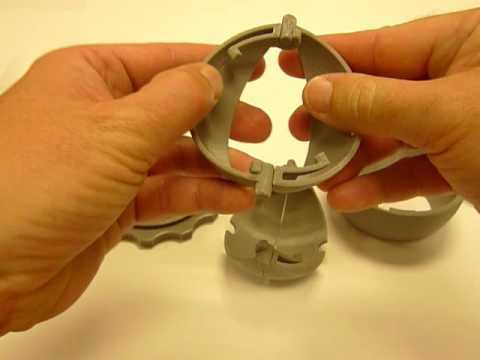 That Tom. He’s a clever fellow. He printed it on a Makerbot Replicator 2 (Hey, we’ve got one of those!) and used some sandpaper to smooth down the four lower cam tracks before assembling. Both STL and Parasolid files are available. Marcin Jedynak made a mod of this one adding teeth to the top doors for even more awesomeness!

You can snag the model files on Thingiverse. (Or grab Marcin’s toothed version here!)