Minecraft is a simple game that anyone can play it: kids, adults, even people with disabilities. But for hardcore players, the game can also be a way to test one’s creativity. Not just within the confines of the game’s rules, but also with how one plays it.

Since the game was too easy for him on a mouse and keyboard, YouTuber Seth Altobelli decided to repurpose a Bop It toy so it could be used on Minecraft. While he did the initial playthroughs, he’s planning on sending this modified Bop It to a fellow Minecraft player, Technoblade, so he can make videos with it. 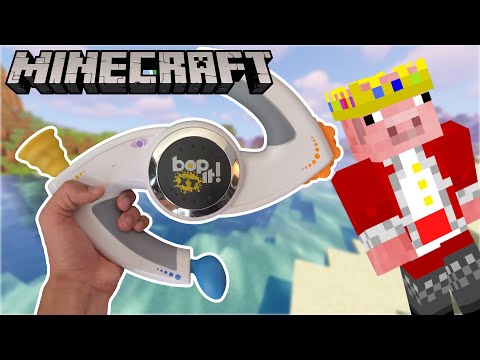 Upon disassembling the Bop It, Altobelli found that the electronics powering the toy were quite simple. All the movable parts of the Bop It fed into a single control board. He replaced this board with a Raspberry Pi Pico which he programmed to repurpose the toy as a mouse and keyboard.

Here’s how it works:

The green knob on top and the blue knob on the bottom allow you to shift through items in your hot bar right and left, respectively. By pulling both the knobs at the same time, you can open your main inventory.

Movement is trickier. Crouching is done by pressing a purple button near the center of the Bop It. By pressing the center button at the back, you can also jump.

Apart from the new control board, he also added an accelerometer. Since none of the Bop It’s parts allow for accurate movement, this accelerometer will let you control how the player character looks and moves. By pressing the front Bop It button, you can toggle between look and walk mode.

As you can probably tell, playing Minecraft with this 90s kids’ toy isn’t the easiest thing in the world. While the left- and right-click buttons are a little intuitive, thanks to their positioning, swapping between items using knobs on opposite ends of the Bop It is a nightmare.

That’s not even mentioning movement. While you can re-center the accelerometer by pressing both the left and right knobs at the same time, swapping between look mode and walk mode in the middle of a hectic situation is difficult, to say the least.

You can see this in Altobelli’s playthroughs of the game. After dying a couple of times while trying to get used to the controls, he finally made it to a point where he had a full stack of iron armor and an iron pickaxe. Things started looking up. He made himself a nice underground home, killed a few animals for food and bedding, and even found a vein of diamonds.

This all took a turn for the worse once he entered the Nether. In this place of hostile creatures and lava, Altobelli finally met his end at the hands of gravity. Since he can’t look down and move at the same time, he unknowingly walked over an edge and fell to his doom.

While the controls could use a little tweaking (there was one part where the game menu suddenly popped up), the Bop It definitely worked as a Minecraft controller. Just as Altobelli wanted, playing the game this way is a lot harder than with a normal controller or a mouse and keyboard.

Technoblade has yet to receive the finished Bop It, but it looks like videos that will be made using this modified controller will be more than a little interesting to watch. I’ll be sure to update this story as it progresses but if you can’t wait, be sure to check out both Altobelli and Technoblade’s YouTube channels.

This Vine Robot Is an Unstoppable Force With Tons of Applications

Make Your Own Censor Button With a Headphone Speaker, a Pill Bottle, and a Circuit Board