Making things with LEGO is cool and pretty easy. The same thing goes for creating the bricks themselves.

Due to the toy’s simple design and the amount of stuff you can build with it, there’s a lot of unofficial products which try to emulate the Danish company’s iconic bricks. Even though they might have been made by fans for personal use, LEGO doesn’t really like it when others butt in on their brick monopoly.

Stian Ervik Wahlvåg is one of these fans. A 3D generalist and multimedia developer, Wahlvåg loves 3D printing toys for both him and others to enjoy. He usually shares his STL files online for free, but he doesn’t post his LEGO blueprints due to LEGO’s unwillingness. 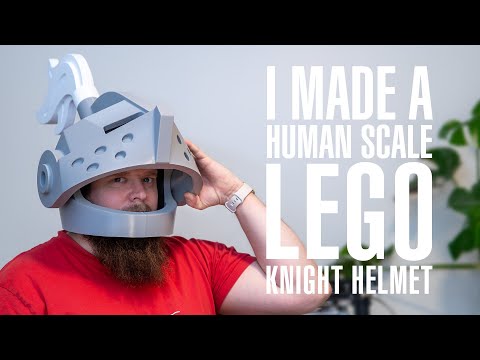 That doesn’t mean he can’t share his love for the brand, though. Using a standard-sized LEGO minifig helm as a basis, Wahlvåg supersized the design and made a life-size LEGO helm for himself to wear to medieval festivals.

As with all 3D prints, Wahlvåg had to first start with a 3D model. He took a couple of pictures of the original minifig helm and placed them inside 3Ds Max. Inside the 3D modeling software, he used the pictures as a guide in building his model.

Before going all-out with a life-size helm, Wahlvåg figured it would be a good idea to start with a smaller 3D print. The first helm was printed on a Creality Ender 3 and it ended up being roughly 200-300% bigger than the original helm.

Satisfied with the final print and how his creation’s visor flips up and down, Wahlvåg then moved on to creating the life-size helm – which should be 2020% bigger than the original LEGO piece.

While Wahlvåg would be using Creality Ender 5 Plus this time,  the settings and filament remained the same. Using grey and white 3DNet PLA filament, the printer ran at 0.2 mm layer height with 8% infill and a 50 mm/s print speed. All of the parts were sliced using Simplify3D.

The most satisfying part of 3D printing anything must be the moment of removing the extra filament and supports. Hearing the crunching sound of excess PLA is like a grown-up’s version of opening Christmas presents.

After Wahlvåg cleaned everything up, the only thing left to do was to assemble the helm parts together.

It doesn’t cover the entire length of his beard, but the helm fits Wahlvåg’s head just fine. Now, his noggin will be safe should he suddenly be challenged to a joust. It took 255 hours to 3D print the helmet parts, and a couple of hours to make the 3D model. Count in the time spent making the miniature 3D print and you’re looking at about a week-long project.

You can find more of Wahlvåg’s projects on his YouTube channel, agepbiz.

Can Old Chainsaw Chains Be Forged Into a Cleaver?

This Elliptical Pool Table Ensures You Hit All Your Shots