Can Old Chainsaw Chains Be Forged Into a Cleaver?

Metalworks require a lot of time, patience, and hard work. Moreover, the materials for metalworking aren’t cheap or easy to come by, so it’s always nice to see some old chunks of metal get recycled into something new. 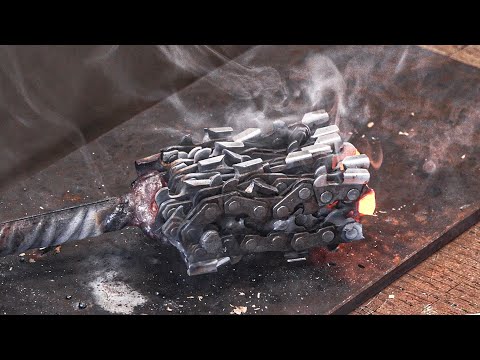 Italian metalworker Black Beard Projects thought it would be a good idea to break down a couple of old chainsaw chain links and forge them into a simple cleaver. It was more of an experiment than an actual project, as he wanted to see whether or not the scrap metal could be forged into Damascus steel.

After cleaning the chains, he cut the metal into smaller links. These links were welded together so that there would be as few gaps as possible between the metal pieces. Finally, the compact links were welded onto a piece of rebar and popped into a forge for the first heating.

Forging the Chain Into Shape

As the metal was being heated, Black Beard made sure to add some borax to prevent oxidation. Once it was hot enough, it was hammered both manually and with a power hammer into a nice flat shape.

You’ll notice that the metal was consistently being heated between hammering sessions. This is the method for forging Damascus steel, which gives the metal its iconic wavy pattern.

The flattened chainsaw metal was then grinded flat and dunked in oil. This plate would be weak on its own, so it was welded to a sturdier, more solid piece of metal. This stronger metal was then heated and hammered together.

This final piece will be the metal used to make the knife, so Black Beard cut it into shape using a grinder. He then applied some heat treatment to the metal before popping it into the forge.

Black Beard let it cool down before grinding it again and giving it some final touches. You can still see remnants of the metal’s previous life on the surface – small circles representing the interlinked chainsaw chain.

This is why Black Beard advises against making a blade out of chainsaw Damascus steel – as he surmises the metal isn’t as strong as it appears. There is a high chance the steel has weak points; largely due to the construction of the original metal.

As for cutting papers though, the chainsaw Damascus cleaver works pretty well; as is anything that is given a proper sharpening. It may not be the strongest metal out there, but you could definitely turn your old chainsaw chains into a knife if you really wanted to!

How Do Potholes Form?