If you’ve seen the newer Jurassic World films and compared them to the original Jurassic Park movie from 1993, you’ll notice a certain lack of wonder. The dinosaurs seem smaller, less intimidating, and more of a backdrop than the centerpiece.

You could chalk this up to nostalgia, but YouTuber Films&Stuff thinks the beauty of the original Jurassic Park stems mostly from Steven Spielberg’s masterful directing. 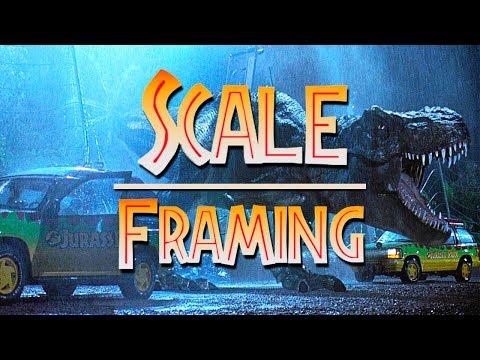 There are a lot of elements that make the movie look larger than life, but Spielberg focuses on two: scale and framing. With some clever camera work, he conveys the mood and tone of a scene using his animatronic (and CGI) dinosaurs as well as the superb acting of the cast.

From the get-go, Films&Stuff mentions that Jurassic Park is filmed in a 1.85:1 aspect ratio – a more vertical framing compared to Jurassic World’s 2.35:1 ratio. While most action films use the latter to make the most out of their high-movement scenes, this doesn’t translate as well when filming dinosaurs.

Jurassic Park is one of the first movies to bring lifelike dinosaurs to the big screen. To make them look larger and more intimidating, Spielberg makes use of the larger vertical space to fully encapsulate the size of these beasts and fill the screen with their presence.

In the Jurassic World sequels, the dinosaurs seem smaller because of how they’re framed. They’re usually in the background, behind manmade structures or with people who take up just as much of the frame as they do.

There isn’t that sense of scale the original movie had, since the dinosaurs don’t really dwarf their human counterparts. Ironically, they seem to be relegated to animals, while the humans become the main focus of the frame and story. This is strangely counterintuitive, considering the movie is called Jurassic World.

Spielberg knows his audience wants the dinosaurs to be front and center, which is why he has used clever camera tricks and scenarios to convey one of two moods every single time these prehistoric animals appear: awe and horror.

There’s a noticeable difference when awe and horror are conveyed. To show a sense of wonder, Spielberg uses wide shots, large-scale backgrounds, and keeps the physical distance between humans and dinosaurs to a minimum. You can see a lot of these shots at the beginning of the film, where the dinosaurs make their first appearance and everyone is captivated by them.

Horror is the other side of this dinosaur-themed coin. During moments of increased tension, Spielberg puts the camera up close to the actors and the danger they are facing. The scenes are set in claustrophobic yet familiar locations like a jeep or a computer room. To make the dinosaurs look more intimidating, the scenes are almost exclusively shot from the humans’ point of view. This creates a feeling that you’re right there with the people in the park, as they struggle to survive this crazy outbreak.

These are just two of many tricks Spielberg had up his sleeve when he made the 1993 classic film. There’s the CGI effects and animatronics which, while not as impressive by today’s standards, provide believable dinosaur models for viewers to gape at. There’s also the script, which many think to be better than the sequels that came after it. But it’s this use of scale and framing to convey emotion which those same sequels have been trying to recapture when creating dinosaurs.

The entire video is definitely worth a watch if you’re a fan of Jurassic Park, as you’ll get a deeper look inside the camerawork which went into making the film. Films&Stuff has more video essays on a ton of blockbuster films, so you can check those out if you’re a cinephile.