Technological innovation has provided us with lots of advanced devices. They allow us to enjoy life by using them in a variety of ways and purposes. And although entertainment seems to be the top function of these devices, most of us appreciate using these new techs for security and surveillance. Thanks to innovative spy cameras, it is possible.

Spy cameras allow us to get a view of specific places anytime by staying incognito. They come in a variety of sizes and shapes that can be utilized at home and other places for observation while we are not around. With this function, they can serve as a strong piece of evidence against heinous acts and this means assurance on your end.

That being said, with so many brands and models on the market, finding the right spy camera has never been simple and easy. So, to help you decide, we've put together a list of the best spy cameras, as well as recommendations from Evangeline Summers, a California-based camera expert, to bring you more valuable insights before having one.

Here's a rundown of their most recent Amazon sales. Simply click the respective buttons below to access their fantastic deals, which we hand-picked for you! 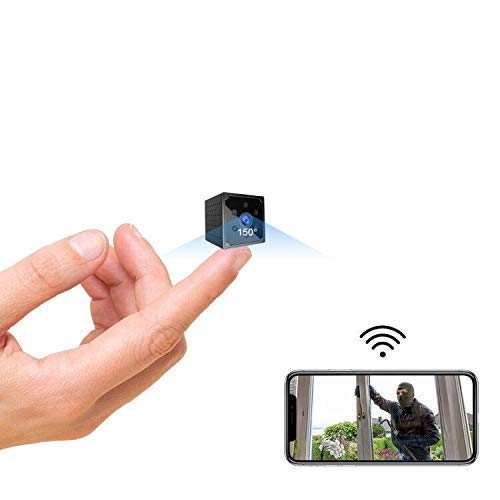 With the Puoneto Q15 Mini Spy Camera, 4K video is now a possibility for spy cameras, outshining standard 1080 P spy cameras in the market. It performs well when recording in ultra HD 4K video resolution, and we can shoot spectacular 4K video upon turning it on. Nonetheless, there are other things to cherish about it.

"For a tiny spy camera," Summers said, "this is pretty impressive that it is equipped with an infrared light source that enables it to remain functional even at low-light conditions. It uses 940 NM IR lights which means it is totally non-glowing and at the 5-meter range, it is pretty great as it can cover at least half the area of a standard-sized living room."

Furthermore, according to Summers, as compared to other brands of cameras, this Puoneto Q15 Mini Spy Camera boasts the maximum operating time by simply plugging it into a wall outlet or handheld power bank to record continuously.

“Another good thing about Puoneto Q15 is that it supports continuous recording capability while charging,” Summers said. “This seems to pose a problem since any device that is being used while on a charging mode could get hot but Puoneto has managed to solve this through its new cooling technology. So, for more than 40 hours, it can work really well!” 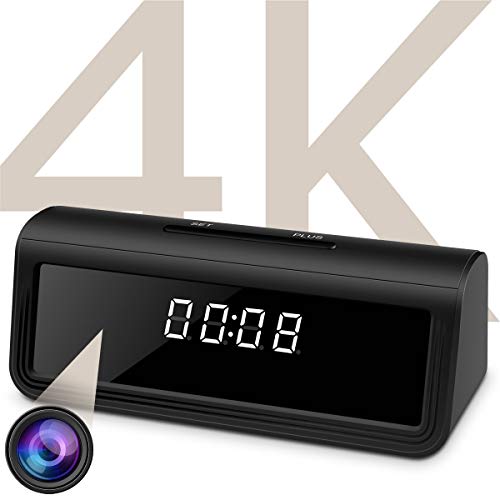 According to Summers, the WAYMOON spy camera is one of the masters of disguise due to its smart designs.

“The common problems about spy cameras,” Summers said, “are the circular lenses that are very distinctive. Hiding them is a problem but this model has managed to do it.”

The lens of the camera is hidden inside the body of the clock and layered by additional protection for further safety. Nonetheless, the unit is still able to deliver a high-quality performance.

“Despite being hidden inside the clock’s body, the camera is still very functional,” Summers said. “It has a wide-angle range at 160-degree which is somehow identical to dash cams and with 4 IR lights, I was amazed that it could project images farther than 15 feet in low-light condition.”

Moreover, we are also pleased that it supports live streaming and recording features. With this, compared to DIVINEEAGLE charger camera, you have access to the footage any time of the day!

This DIVINEEAGLE Spy Camera is an advanced 2-in-1 device that functions as a regular USB charger for mobile devices while also recording video in 1080 P full HD. It supports up to 256 GB SD card, which allows for the storage of 50 hours of video.

“You can also use a 32 GB micro SD card that can last up to 3 hours with continuous use and 12 GB micro SD for up to 12 hours,” said Summers. “The good thing about this is that even though you are using a 32 GB SD card, memory capacity is not a problem as the system of the cam supports the loop-recording feature. In short, it will continuously record as long as it is attached to a power source and contains a card.”

We also love that it allows you to choose the function of the camera between two modes: Motion and Continuous Recording.

“At motion-recording mode, the sensor of the camera is pretty reliable given the size of the camera is too small,” Summers stated. “The sensor can be activated within 15 feet and since it completely appears as a phone charger, you can be confident that it can go unnoticed even the intruder comes close to the lens. A really genius design!”
Check Price 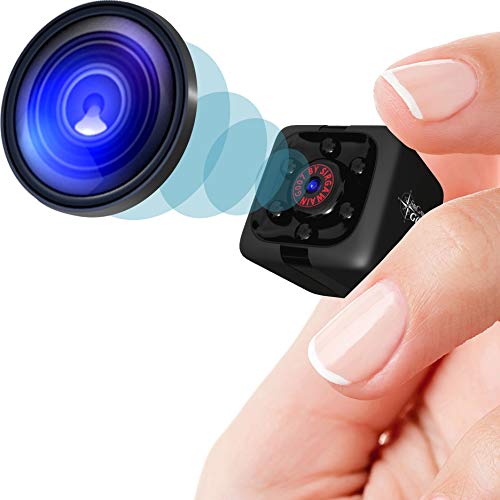 “If you just need a light-duty spy camera, SIRGAWAIN mini cam is smoothing you can rely on,” said Summers, “It is tiny that it almost looks like a pendant and has 1080 P video resolution that can secretly capture just the right amount of detail.”

After reiterating that it is just for lightweight uses, Summers commended that it is equipped with great features that despite having a one-hour battery life, it can deliver great performance.

“If you want it to work 24/7, you can plug it to a power source for continuous recording since it is supported by loop recording,” she said, “but the most impressive thing about this is that for its size, it has superior characteristics that can be compared to most digital cameras: resolutions, 140-degree angle lens, long sight range, and infrared lights.” 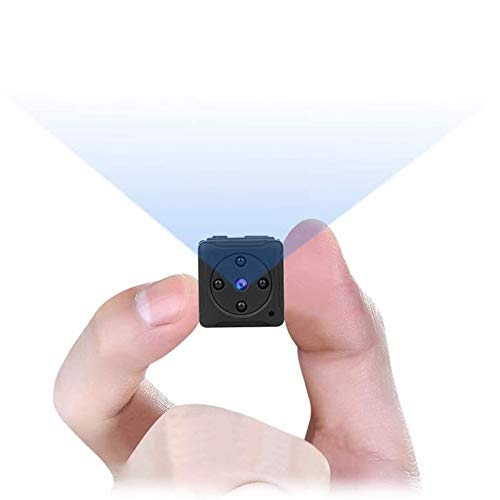 This MHDYT Mini Spy Camera is the tiniest compact spy camera on the market, measuring just as tiny as a 5 cent coin yet featuring a removable mirror and magnet that can be as useful as ever.

The best thing about this hidden surveillance camera, according to Summers, is how easily it can go hidden.

“At 0.87 inches, you can easily hide it and that’s one of its greatest strengths,” said Summers, “but if you want to buy this, it is important to note that it is less superior than SIRGAWAIN mini camera and Puoneto Q15. Besides the shorter life of its built-in battery, its lens has a narrow angle at 75 degrees. This means that you won’t be able to see much of the things on the edge of the camera.”

Nonetheless, Summers also pointed out that despite the narrow angle of the cam, it can still deliver reliable details of images using its 1080 P video resolution. That said, is it still something to consider? For its easy-to-conceal size and fair features, definitely!

One of the most important factors to consider when purchasing a spy camera is the power source. Keep in mind that if we want to use the spy camera around the clock, we'll need an AC-powered spy camera. This will keep the camera powered on and ready to use 24/7. A battery-powered spy camera, on the other hand, may be useful in remote areas or if our home or company is vulnerable to power outages. Nonetheless, some models are equipped with both AC and battery power sources.

Another critical factor to consider is the quality and consistency of the video. Due to the small size of spy cameras, their efficiency can be inferior to that of a normal camera. Purchase a product with a minimum of 720 P to get a decent quality of footage. Or, even better, invest in a spy camera capable of recording video in 1080 P or higher resolution.

Night vision, motion detection, and cooling technology are some of the critical features to look for in a spy camera. When the lights go out or it's dark outside and our spy camera is fixed outside, the night vision feature is optimal. It allows us to see what is going on through poor lighting and even in the dark. Motion activation, on the other hand, allows us to save battery power and storage capacity by just capturing if there is motion. When movement is observed, motion activation normally starts recording and continues for up to 2 minutes until the movement stops.

The ability to view and manipulate our spy camera from a smartphone or other mobile device eliminates the need for us to be seated in front of a screen to monitor what is going on in our home or office. Picking a spy camera with an interactive app is essential, perhaps more so if we are not experienced users of technology. With the majority of spy cameras, we can monitor and record the operation on our smartphone and perhaps other mobile devices through a downloadable app.

How far can spy cameras reach?

Very small spy cameras can reach at least 300 feet, given that there is enough illumination. Keep in mind that higher-powered transmitter and receiver or high-gain antennas should be used to reach relatively long distances.

Is it legal to use spy cameras?

In particular, recording security footage with a spy camera in our home even without the express permission of the person being recorded is legal in the United States. As a result, nanny cams have become much more popular by many parents and guardians who work full time throughout the day.

How long can the spy cam record a video?

Is it possible to use a spy camera without WiFi?

Yes, you can even get video footage and get local recordings even if your spy cameras have no access to the internet.