Despite being home to hundreds of dangerous insects, many people’s first thought when they see a wasp nest is to poke a stick at it.

That’s the first thought. Once the wasps have evacuated their home and finished stinging everything in sight, these people would probably look for an act of revenge. Well, we’ll tell you how to do it in an artistic way as this is exactly what Ben from Ben’s Worx had in mind.

With some leftover wasp nest from a previous project, he decided the best way to make use of it was to cast it in resin and to turn it into a gear shift knob: 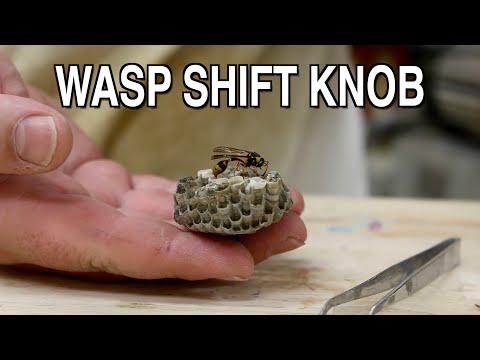 To make the gear shift knob stand out, Ben added a little something extra on top of the wasp nest: an actual wasp. Don’t worry, the wasp was good and dead, so it didn’t put up a fight as Ben applied a small helping of UV resin to stick it to the nest.

This pre-casting resin proved to be just the adhesive Ben needed, as he would be pouring even more resin on top of it afterward. Once the resin was applied, he used UV light to help it solidify. He applied the same UV resin to the bottom of the wasp nest and stuck it inside a plastic cup so it could maintain an upright position for the main resin casting.

With the wasp nest in position, Ben poured his resin mixture (mixed with some red pigment) inside the plastic cup. After the resin settled, he popped it into his pressure pot to remove any stray air bubbles.

Here’s a first: we actually get to see the inside of the pressure pot as it pressurized the wasp nest cast. With Ben’s patented “potcam”, you can see the air bubbles rising to the top of the resin and dissipating – leaving nothing but a clear, airless cast in the cup.

After the resin was pressurized, Ben took the cast out of the pressure pot and popped it out of the plastic cup.

To prep the resin for the lathe, he glued his casted wasp nest to a wood base. This provided the lathe with something sturdy to latch onto while turning the resin. With the base and resin firmly secure, Ben started chipping away at the resin shell.

At the beginning, the resin cast shared the contour of the plastic cup it used to reside in. But with Ben’s expert chiseling skills, he carved a nice, circular knob that can be used on a number of different gear shifts.

After some wet sanding to smoothen out the edges and some wood polish to shine the base, the wasp gear shift knob is finally done.

You will notice that the knob doesn’t have any holes under it. This is because, unlike his other works, Ben plans to give this out as a gift to a certain lucky individual who would comment on this particular video.

The winner can then modify the knob to fit his or her vehicle, or if they decide to use it for something else, change it entirely. I personally would love to see this thing on a cane, as it would make a great conversation piece.

Whatever the winner decides to do with it, you can’t deny having a wasp nest encased in resin emanates a feeling of danger, satisfaction, and wonder.