We all know Spider-Man through his abilities to shoot and swing from his own webs. He produces them using the man-made web shooters on his wrists. It isn’t a superpower at all – it’s the result of Peter Parker’s scientific prowess.

Countless people have since tried to recreate the fictional character’s web shooters in the real world. Grappling hooks, ropes, actual spider silk – you name it, chances are someone in a Spider-Man costume has swung from it.

But few actually try to understand the science behind Spider-Man’s webbing. That’s what JT of Built IRL tried to do. He discovered that there are a few ways to produce artificial fibers by mixing various liquids together (just like how Peter Parker mixes his web fluid in the comics): 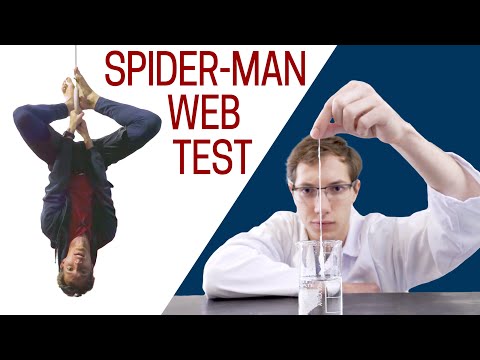 The artificial fiber he tried to create is called rayon, also known as artificial silk. By mixing malachite powder with ammonia, he created a blue mixture that can dissolve cotton wool. He then placed this mixture into a syringe and injected it into some sulfuric acid.

The sulfuric acid promptly turned the syringed mixture from liquid to solid (and changed the color from a cool blue into a clear white). This is rayon – an artificial substitute for silk which, when put through some heavy industrial processes, can become the strongest fiber in the world (even stronger than natural silk).

Sadly, JT didn’t have the industrial equipment to produce such a strong rayon rope. So instead of making his own webbing, he settled on a pre-made ultra-strong fiber as a substitute.

But finding a strong cord was only half the battle. To mimic Spider-Man’s iconic mode of travel, JT needed to create a method of attaching the fiber to surfaces so he could swing from them.

He tried countless designs – electromagnets, suction pads, grappling hooks – many of which were overly complex and cumbersome. Eventually he looked to Velcro for inspiration. Since Velcro uses a number of small plastic hooks and hoops to fasten two surfaces together, JT thought of incorporating the design philosophy into his Spider-Man web.

Enter the hook chain – JT’s answer to the modern Spider-Man fantasy. By affixing a number of steel alloy hooks to one end of the fiber rope, you can latch onto any solid surface on which the rope can be wrapped around.

Early designs of the hook chain included knotted loops, but JT soon figured out that he didn’t need the loops to get a good hook in. Metal pipes, weapons, even human appendages could all be hooked in by the hook chain.

But the real test of that hook chain was seeing if it could support the weight of a person swinging off of it. Using a gym ring on the holding end to stave off friction burn, JT latched the hook chain onto a suspended pipe and did the only reasonable thing any Spider-Man fan would do given the situation – he jumped.

Thanks to science and good design, the hook chain did exactly what it was made to do. JT swung in a wide arc before letting go and landing on the ground below!

It looks simple, but that was the result of good design and engineering. Just like Spider-Man’s webbing, the beauty of the design is how much work it takes to make something simple and easy to use.

There is still room for improvement. Already, JT is thinking of ways the hook chain can be fired in succession and swung from without the use of a cumbersome gym ring. He now plans on working this into a future video, so be sure to check out his YouTube channel, Built IRL, to stay up to date on his web shooter improvements.