The Canadian company has been busy building and marketing the Palette, which we’ve covered previously. This device is an ingenious 3D printer accessory which dynamically splices differently colored input filaments together in just the right sequence and lengths to enable printing of a multicolored (or indeed multimaterial) object.

But while this hardware is quite interesting, there is the matter of software to drive it. How can a print job know where to put which material?

Most, if not all, commonly used desktop 3D printing software is focused on single-material (and color) objects. And in the few software systems that do accommodate multi-materials, it usually ends up that you can select a material for each independent 3D “shell” on the print plate.

That’s not very useful, particularly if you just want to place some text on the side of a 3D model, for example. With that paradigm you must literally use your CAD program to carve out the 3D representation of the digits and create a bunch of independent 3D shells. Not fun.

But CANVAS hopes to simplify all this, as the first release of CANVAS will permit easy assignment of color to 3D models.

The company is also integrating a series of customizable 3D models for tweaking – and coloring – before 3D printing. In their video, you can see how this can work: 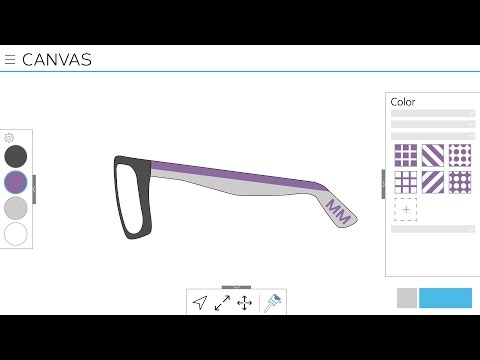 They say their customizer solution is easy to use, even for those without CAD experience. If so, this could open up many possibilities in the future.

The CANVAS software will be available (at least initially) at no charge, but will not be open sourced. The company does wish it to become a standard by integrating support for many other multimaterial 3D printers, such as the BCN3D Sigma and Ultimaker 3 machines, with others to follow.

Their intent is to eventually charge for the software based on premium features yet to be announced. However, it may be challenging for them to achieve their goal of using this software as an industry standard, as it is tied pretty tightly to their company.

But the good news is that there is movement on the seemingly intractable problem of easy 3D model coloring.